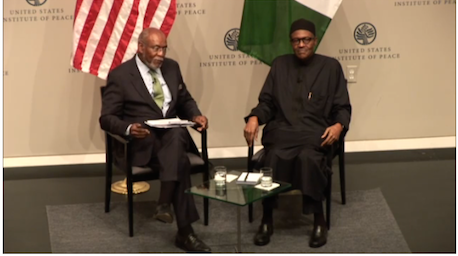 President Muhammadu Buhari’s trip to the United States has been trailed by some sort of “confusion” over his reference to the Leahy law as aiding or abetting Boko Haram in address at the US Institute for Peace,USIP.

Newsdiaryonline was told that “Buhari’s inner caucus and the inner caucus of the All Progressives Congress,APC belive that there was malicious intent behind the inclusion of that Leahy Law issue in the speech.

The caucuses believe that that aspect was injected to undermined the very successful trip by President Buhari to the United States.

“Well don’t want to say that he alone or others will be fired, but heads may roll. And there is confusion over the matter right now.Being an officer appointed by former President Goodluck Jonathan, the DG NIA is being accused of malicious intent over the inclusion of that Leahy law issue to undermine the goodwill Buhari enjoyed during the US trip,” Newsdiaryonline was told .

In his address at USIP that is said ,according to diplomatic sources to be causing “confusion” now ,Buhari said “In our efforts at combating the activities of Boko Haram, the new Government has sought and obtained the support of not only our neighbours other international friends and partners. Regrettably, the blanket application of the Leahy Law by the United States on the grounds of unproven allegations of human rights violations levelled against our forces has denied us access to appropriate strategic weapons to prosecute the war against the insurgents. In the face of abduction of innocent school girls from their hostels, indiscriminate bombings of civilians in markets and places of worship, our forces have remained largely impotent because they do not possess the appropriate weapons and technology which they could have had, had the so called human rights violations not been an obstacle.

“?Unwittingly, and I dare say, unintentionally, the application of the Leahy law amendment by the U. S. Government has aided and abated the Boko Haram terrorist group in the prosecution of its extremist ideology and hate, the indiscriminate killings and maiming of civilians, in raping of women and girls, and in their other heinous crimes. I believe this is not the spirit of the Leahy Laws. I know the American people cannot support any group engaged in these crimes.

“?I therefore strongly appeal to both the Executive Arm and the US Congress to examine how the US Government can provide us with far more substantial counter-terrorism assistance with minimal strings. The longer we delay, the deadlier the Boko Haram gets. At all events, we have re-written the rules of engagement protecting the rights of combatants and in particular safeguarding civilians in theatres of conflict.”

Presidency Says It Would Be Wrong For Buhari To Continue Amnesty Prog. Without Looking At The Entire Package