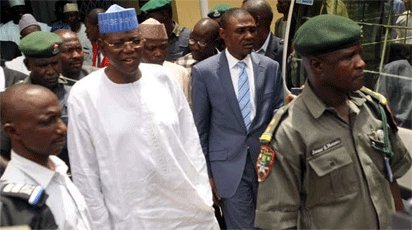 Justice Gabriel Kolawole ordered Lamido to surrender all his travelling documents to the Deputy Chief Registrar of the court.

Similarly, the court, while granting bail to Lamido’s two sons, Aminu and Mustapha, and their alleged accomplice, Wada Abubakar, ordered them to pay the sum of N25million each.

They were further asked to provide two sureties, one of who must be a civil servant not bellow grade level 16.

Justice Evelyn Anyadike of the Kano Division of the high court had on July 9, remanded the ex-governor and his sons in prison after they were arraigned over a 28-count criminal charge that was entered against them by the Economic and Financial Crimes Commission, EFCC.

They are facing trial alongside one Wada Abubakar over alleged money laundering and illegal diversion of public funds to the tune of N1.35billion.

Lamido was equally alleged to have collected kickbacks from contractors in the state, with the funds allegedly paid into accounts that were managed by his sons.