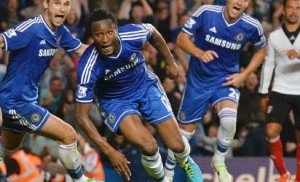 The Nigeria international, who started only six league games last season, wants to leave Stamford Bridge after failing to hold down a regular starting place.

The 28-year-old, who has two years left on his contract, has been told he remains part of manager Mourinho’s future plans. “There’s absolutely no truth to reports linking Mikel with a move to Turkey or any Chinese club for that matter,” a source close to the talks said. “Only two clubs from the UAE showed strong interest last month but they could not meet his club’s valuation.

“Mikel has a contract with Chelsea until 2017, as things stand he will not be leaving the club this transfer window as speculated.
”Mikel who moved to Chelsea in the summer of 2006 has increasingly become a fringe member of the squad due to the form of Nemanja Matic. With the emergence of highly-rated midfielder Ruben Loftus-Cheek, the Super Eagle has fallen down the pecking order at the club ahead of the 2015/16 season. Fenerbahce are reportedly interested in signing Mikel but Chelsea will only listen to a US $16.8 million offer.