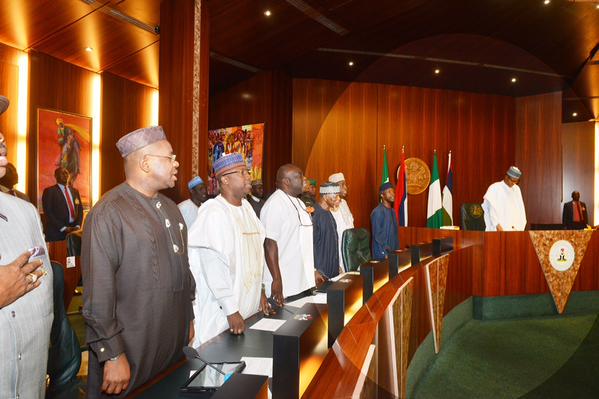 After days of insisting that there would be no bailout for states and local government councils in the country, President Muhammadu Buhari, may have finally yielded to pressure, shifting grounds on the matter.

The Federal Government, on Monday agreed to share about $1.7 billion (N391 billion) left in the controversial Excess Crude Account, a move that would ensure that states and local councils pay salaries and meet other obligations.

State governors had last week at the National Economic Council (NEC) meeting demanded the sharing of the funds in the account, which they had then put at $2 billion.

And of course Nigerians reacted to the decision by President Buhari in the tweets as seen below…..

I thought "The Excess Crude Account" was "a bad idea"? Well, it has saved the same governors who were opposed to it.

GMB's plan to share $1.7b from Excess Crude Account is meant to compensate those who sponsored his election especially in the APC states.

You "blame Jonathan & Okonjo-Iweala for not putting enough money in the ECA" Then you go & deplete the ECA Logic of Kagawa.

Now waiting for the sure day that these same governors will accuse @MBuhari of sharing the ECA to them! https://t.co/fu0STypFM7

See how much governors have received from Excess Crude Account. What did they do with these funds? pic.twitter.com/MqPToGqsyp

$1.7billion of the $2billion balance in the ECA to be shared?! Please tell me stringent stipulations exist...nvm. It's Nigeria.

No minister of Finance? No economic team in place yet you want to empty the ECA?

With just about $300m left in it, the Excess Crude Account will now finally take a long rest, if not entirely dead!

Naira Takes Further Bashing In Market, Now N240 To A Dollar At BDC