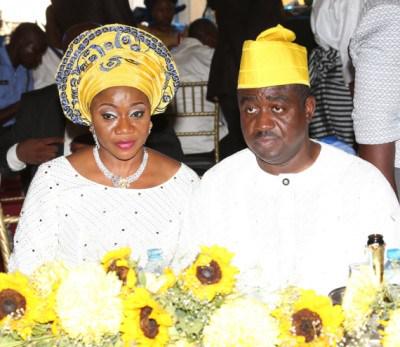 A former Governor of Benue State, Mr. Gabriel Suswam, has denied being arrested in London for allegedly beating his wife, Yemisi.

The former governor, in a statement on Sunday in Abuja, said reports that he beat his wife were the handiwork of filthy politicians in the state, who were bent on tarnishing his hard earned reputation.

Suswan urged Nigerians to disregard the latest propaganda against him “by those who have sworn to stop at nothing to belittle what” he had achieved in Benue State.

He cautioned that there should be a limit to falsehood, adding that the allegations were unsubstantiated.

According to the report in an online medium, Suswan was purportedly arrested in London for battering his wife.

He was reportedly booked into the London detention centre for several hours and before an unidentified judge set a £5,000 bail bound which he met before being released.

Suswam described the report as fictitious and denied ever going to London with his wife. He said he had been in Germany with his wife on vacation.

He said since he and his wife left Nigeria, they had never been to London.

Suswan also faulted a claim that Yemisi’s trauma was as result of the overbearing influence of his mistress, adding that the mistress existed in the imagination of the author.

The former governor faulted another report that alleged that his wife and her associates drove in two large trucks to the Benue State Liaison Office in Abuja, with the intent to cart away all the expensive furnishings.

“But I make bold to ask: Is it possible for one to destroy what he has spent his hard earned fortune and reputation in governance to build? Was it not the same government house that both me and the incumbent Governor Samuel Ortom met for inspection and stock inventory taken and issues of concern raised and resolved before I left?,” Suswam further queried.