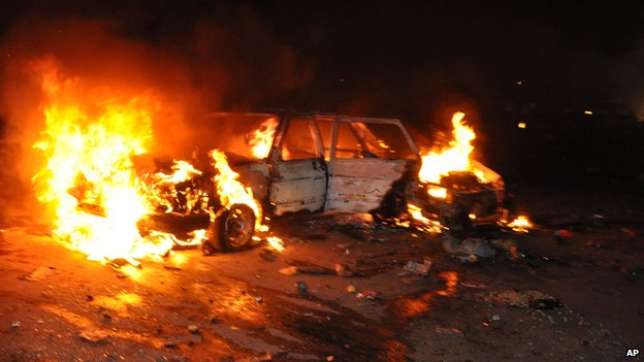 An explosion has ripped through Moru Moru market in Gamboru, near Maiduguri, the Borno State capital. Four people have been conformed dead in the explosion. The bomb attack comes barely 24 hours after a suicide attack on a mosque in Maiduguri.

Our correspondent gathered that the militants stormed Ngalda village around 6:30pm where they seized fuel from black marketers and burgled provision stores before attacking Fika, the local government headquarters.

Malam Ahmadu Maikano, a resident in Fika said that gunmen went into the town in two hilux vans and 5 motorcycles shooting sporadically “They burnt down police station, local government secretariat, LEA and departments of health, works,” he said.

He said the militants snatched an open van parked in the town and loaded it with food stuffs, drinks and other essentials from the two provision stores they forced opened.

He said residents had earlier gotten wind of the insurgents’ advance hours to the attack. “That’s why many residents didn’t sleep in Ngalda and Fika, we all fled to save places” he said adding that no lost of lives has been reported.

When contacted, Yobe state Police Public Relation Officer, Mr Toyin Gbadegesin said he is not aware of the attack “But, I will call the CP (Commissioner of Police) for confirmation.”

“Ask Your Daughter The Writer To Bring The Money,” Chimamanda Adichie Writes On Her Father’s Traumatic Abduction