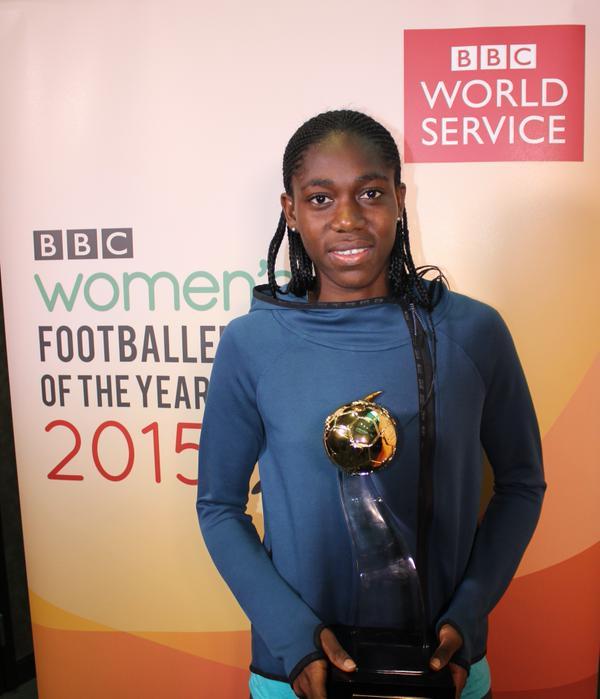 Super Eagles and Liverpool Ladies striker, Asisat Oshoala has clinched the maiden edition of BBC Women Footballer of the Year.

The 20-year-old forward is the first player to win the new award from the BBC World Service, voted for by football fans across the globe.

Oshoala beat Spain’s Veronica Boquete, German Nadine Kessler, Scot Kim Little and Brazilian Marta to the gong. She is currently in Canada with the Super Falcons for the 2015 Women’s World Cup, hopes the award will spur her team to victory.

“I would like to say thank you to the BBC, to my fans around the world and to everyone who voted,” she said.

“It’s a really good thing for us as a team because we now know that we have something great and now we want to go at the trophy. We can do it, we did it in 2014; we can also do it this year as well.

“There is going to be a lot of motivation for women’s football in Nigeria now because of this award, because there are a lot of fans out there.

“I know my Liverpool Ladies coach is going to be happy right now. Before I left the UK he called me and said to me ‘Don’t worry, I hope you win the award and we’re going to celebrate it when you come back.’”

She was the tournament’s leading scorer and best player.

The former Rivers Angels forward also played a key role in the senior team’s triumph at the African Women’s Championship in October which earned qualification for this summer’s World Cup in Canada that starts on June 6.

Oshoala signed for Liverpool Ladies in January 2015, becoming the first African to feature in the Women’s Super League.