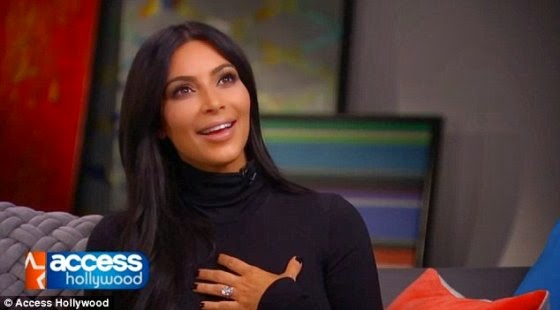 Speaking to Access Hollywood Kim said; ‘I think it was six months after I was newly single in like 2012, I was like why not? Like, what am I waiting for? I called Kanye because I’m sure it was really hurtful that I got married and, even though it’s not like we communicated all the time, I knew what he was thinking .And then – he’s always been a good friend to me, like, we’ve always been there for each other – then he invited me to a fashion show of his in Paris and I went, and then the magic happened.’

She said she was at first hesitant to start dating so soon after her marriage ended but decided why not?

“But then in my head I was like, “You know what? Screw it. Like, this is probably what I’ve been waiting for, it’s been in front of my face.'”

Speaking on how long it took before they finally got together, Kim said.

‘When I first met [Kanye], we worked on a project together and there was definitely a spark, but we were in other relationships and we kept our distance”

We stayed in touch here and there and then when he wasn’t in relationships, you know, it’s just our timing would always not really coincide.