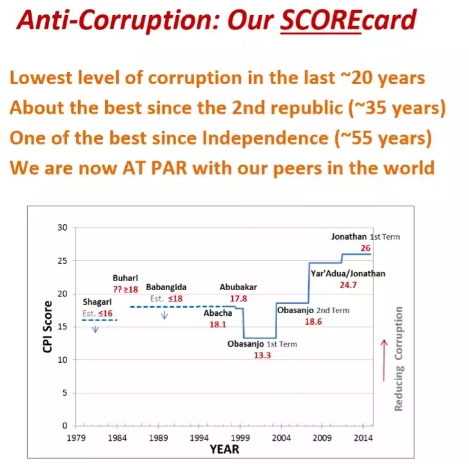 Transparency International has rated the out going government of Presidet Goodluck Jonathan as the best compare the past governments headed President-Elect Gen. Muhammadu Buhari and that of Chief Oluegun Obasanjo

According to Transparency In¬ternational’s data from 1979 till date, the tenures of both General Muhammadu Buhari and former President Olusegun Obasanjo were more corrupt than the tenure of President Goodluck Jonathan.

The data also showed that under the administration of President Jonathan, Nigeria has recorded its best score in the Corruption Perception Index (CPI) since 1979. This is in complete contrast to the sordid picture of rampant corruption being painted by the opposition, ardent critics of the Jonathan administration and much of the media in the last few years – especially in the build up to the general elections.

But the point that the figures from Transparency International make so clearly is that, in com¬parative terms, Nigeria is actually much less corrupt today, and per¬ceived globally to be much less corrupt today, than it has been in the last 35 years – including under the regimes of General Buhari and President Obasanjo, both of who wear the toga and chant the man¬tra of anti-corruption.

Shockingly, according to the TI data, President Obasanjo’s first tenure had the worst scale of corruption during the 35 years period between 1979 and 2015.

The TI Corruption Perception Index is a rating of countries from 1 to 100 showing their corruption scale. A rating of 1 is the worst and rating of 100 means a country is completely free of corruption. The pass mark is 50 and any country scoring below 50 is considered a corrupt country.

In the 2014 Transparency In¬ternational’s Corruption Percep¬tion Index, issued in December, Nigeria was ranked 136 out of 175 countries surveyed in the re¬port. This ranking placed Nigeria, alongside five other countries, as the 39th most corrupt country in the world. This is Nigeria’s best ranking in the last four years.

With this ranking, Nigeria leap¬frogged eight countries within a space of one year – from the 31st most corrupt nation in 2013 to the 39th in 2014. This may be regard¬ed by cynics as a small achieve¬ment: but it represents a big step in the right direction.

Indeed, the administration of President Jonathan deserves some commendation for the positive steps it has taken, and the modest achievements it has made so far, in the war against corruption – rather than the vengeful knocks it is re¬ceiving from various quarters.

US Warns Gambian President, Yahya Jammeh, To Be More Tolerant of Gays Or Made To Face The Consequences