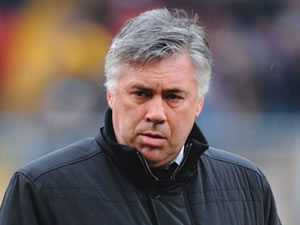 Real Madrid boss Carlo Ancelotti has been given a two-game touchline suspension by the Spanish Football Federation, Sky Sports reports.

The decision means the former Milan boss will be unable to sit on the bench for the rest of the La Liga season.

Ancelotti was reported by referee Carlos Clos Gomez for sarcastically applauding the officials at the end of Madrid’s 2-2 draw with Valencia on Saturday which all but ended their title hopes.

Los Blancos trail Barcelona by four points with just two games away to Espanyol and home to Getafe left to play.

However, the Italian is still free to marshal his troops from the touchline in Wednesday’s Champions League semi-final second-leg with Juventus as well as in the final should Real Madrid get through.

Ancelotti’s former club hold a 2-1 lead from the first leg after goals from ex-Real striker Alvaro Morata and a Carlos Tevez penalty.