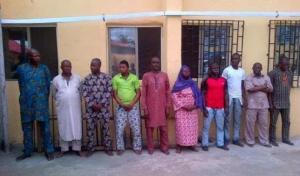 Nine men and one woman were on Tuesday remanded in prison custody by an Ikeja High Court, Lagos following their connection with the Ejigbo Pepper Sodomy.

The 10 were brought to court over the torture, attempted murder and sodomy of three females accused of stealing pepper at Oba Morufu International Market in Ejigbo area of Lagos State.

The defendants were accused to have at Oba Morufu International Market in Ejigbo inserted a stick into the vagina of Nike Salami and Juliana Agomo. They also assaulted one Ajoke Agomo by stripping her naked, beating her up and rubbing pepper all over her body.

According to the charge, the 1st defendant (Waidi) and 5th defendant (Lateef) unlawfully obtained the sum of N50,000 from one Fima Agomo with intent to defraud by falsely pretending that the said money would be paid to traders in the market whose pepper had been stolen.

Breaking: Herdsmen Killed Six Soldiers, Had Their Eyes Gorged Out And Tongues Cut Off In Plateau