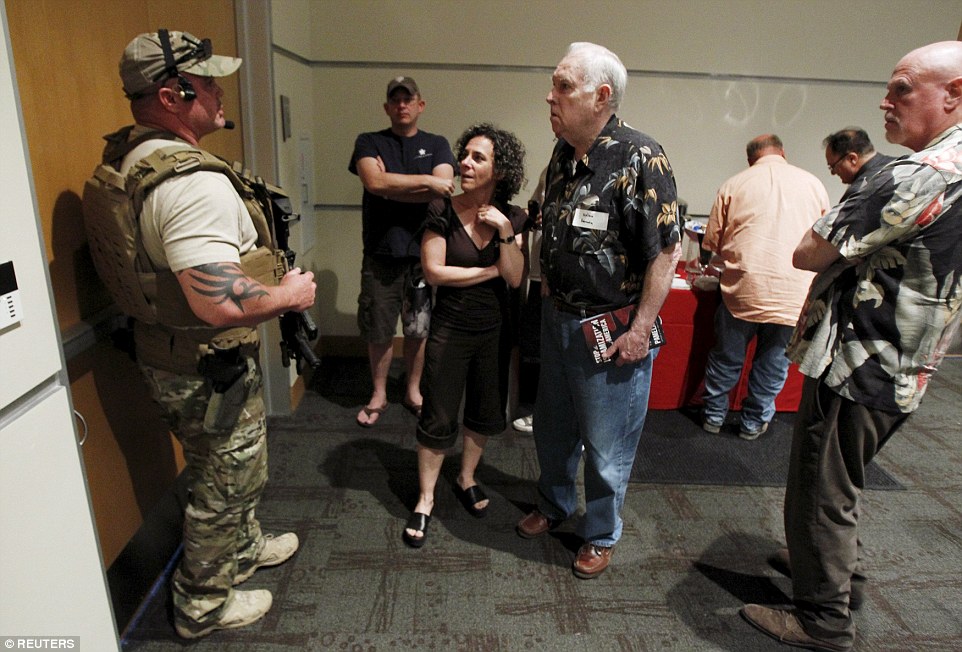 American Police officers have killed two gunmen, who  opened fire on Sunday at an art exhibition in Texas, that was organized by an anti-Islamic group and featured caricatures of the Prophet Mohammad.

The shooting presents an unpleasant reminder of past attacks or threats in other Western countries against art depicting the Prophet. Western art depicting the Prophet has sometimes angered Muslims and provoked threats from radicals. In January, Islamist gunmen attacked the Paris offices of the French satirical magazine Charlie Hebdo in revenge for its cartoons of the Prophet, killing 12 people.

In their account of this latest threat to free speech on Sunday, Police said they had not immediately determined the identity of the two gunmen or whether they were linked to critics of the event who branded it anti-Islamic. The exhibition took place shortly before 7 p.m. in a parking lot of the Curtis Culwell Center in Garland, northeast of Dallas.

“I have no idea who they area, other than they’re dead and in the street,” city police spokesman, officer Joe Harn, told Reuters.

As a precaution, police were examining the suspects’ car for any explosives that might be in the vehicle, Harn added.

The exhibit in Garland was organized by Pamela Geller, president of the American Freedom Defense Initiative (AFDI). Her organization, which is described by the Southern Poverty Law Center as a hate group, has sponsored anti-Islamic advertising campaigns in transit systems across the country.

The two armed suspects drove up to the front of the building in a car as the event, called the “Muhammad Art Exhibit,” was coming to an end, and began shooting at a security officer, striking him in the leg, Harn said.

Garland police officers who were on the scene assisting with security then exchanged fire with the gunmen, and both suspects were shot dead, Harn said.

The security officer was treated at a local hospital and later released, he said. No one else was injured.

Most of the people attending the event were still inside the arena when the violence unfolded and were unaware of what had occurred until police came into the building and advised everyone to remain indoors because of the shooting.

Organizers of the Garland event offered a $10,000 prize for the best artwork or cartoon depicting the Prophet, as well as a $2,500 “People’s Choice Award.”

Geller is known for her stance on Islam. In 2010, she led a march to the site of a proposed Islamic center near the site of the destroyed World Trade Center.

In response the shooting in Garland, the AFDI issued a statement on Facebook saying, “This is war on free speech. What are we going to do? Are we going to surrender to these monsters?”

“Nigeria Is Rich, But Nigerians Are Poor” – EU Tells Buhari To Ensure Improved Standard Of Living

“Why Are The Citizens Not In Their Countries?” How Jacob Zuma Reacted To Xenophobia In South Africa