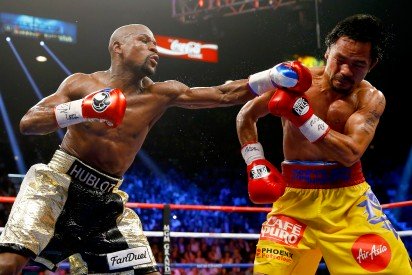 Pacquiao fell to 57-6 with two drawn, never able to mount the kind of sustained aggressive attack he needed to earn the decision.
Even so, Pacquiao said he thought he did enough to earn the victory.

In fact, Mayweather did what he does best, skilfully thwarting Pacquiao’s offense.

Although his punches didn’t come in the bunches that Pacquiao’s did, there were plenty of telling blows.

Ringside judge Dave Moretti scored the bout 118-110 for Mayweather, while judges Glenn Feldman and Bert Clements both scored it 116-112 for the American.

Breaking: Rio Ferdinand’s Wife, Rebecca, Has Passed Away After A Short Battle With Cancer