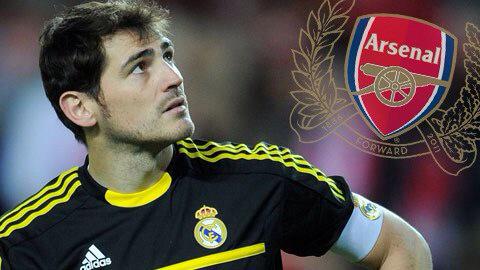 Legendary, Real Madrid goalkeeper , Iker Casillas could be sold to Arsenal this summer, having joined the club’s academy 25 years ago.

Spanish TV station La Sexta this afternoon reported that Casillas will become an Arsenal player, with Real Madrid set to payout the last two years of his deal at the Bernabeu.

The 33 year old stopper, capped 161 times by Spain, has spoken of his desire to see out his contract at Real Madrid on various occasions.

However, Real Madrid have reportedly been trying to convince Iker Casillas to leave in order to bring in Manchester United star David De Gea.

If Real Madrid are truly willing to pay Iker Casillas his wages for 2016 and 2017, Arsenal will not need to match his high Real Madrid salary.

However, Arsene Wenger does already have two first team goalkeepers in David Ospina and Wojciech Szcz?sny.

It’s worth noting that La Sexta broke the shock Falcao to Monaco story as well as the Xabi Alonso to Bayern Munich transfer.

“I Am The Right Man For The Job” Nigeria’s Coach, Stephen Keshi, Boasts