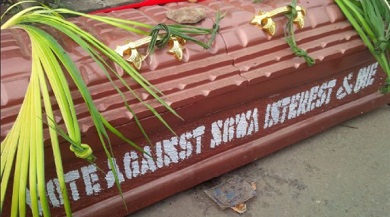 Frontline candidates of the two major political parties in the Abia state gubernatorial elections, Alex Otti of APGA and PDP’s Okezie Ikpeazu; have both distanced themselves from the caskets that appeared in the streets of Aba.

Both candidates have condemned the act and denied responsibility for the coffins; while blaming each other for the situation.

Alex Otti, described it as “a despicable, shameful and barbaric act by desperate and frustrated politicians.”

On his part, Ikpeazu said ” such is the handiwork of the opposition who have shown their desperations in various ways since the beginning of the governorship contest.”

With barely 24 hours left until the Abia State elections are re-conducted, many residents in Aba were stunned, as caskets with threatening inscriptions littered the streets for over two days.

The warnings inscribed on the coffins state that if people fail to vote for an Ngwa governor, they will be killed.

It would be recalled that INEC ruled that governorship election results in the state were inconclusive, hence the decision to re-conduct the elections.