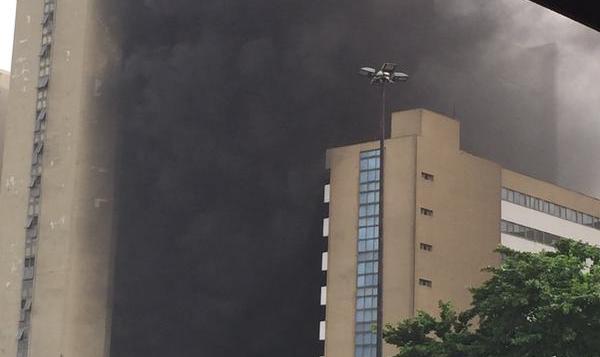 The Mamman Kontagora House along Marina in Lagos is on fire at the moment. Reports say the fire has spread to 2 floors of the iconic building.

The Lagos State Fire service has confirmed the inferno and are on their way to quelling the incident. People who work in nearby buildings have been uploading pictures of smoke emanating from the building on social media site, Twitter.

The fire is currently on two floors, and emanated from the Generator House of the Marina axis of the Kontagora House. At the moment, the Lagos State Fire Service and the Union Bank Fire Service have almost exhausted their water pumps and the fire has been minimally, contained.

At the moment, the fire is still on and readers are advised to avoid that route and thread with caution on that path, as efforts to contain the inferno are put in place.

The Kontagora House, is a citadel of commerce that houses about two commercial banks and several other private businesses.

Daughter Of The Fourth Most Corrupt Leader, Sani Abacha, Wants To Join APC