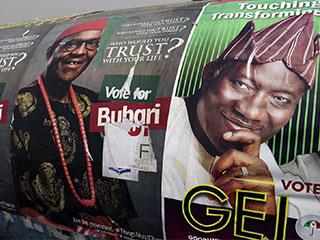 On behalf of “Mama Peace” and myself, I would like to congratulate you again on your historic victory in the March 28 presidential election. Why do I call it historic?

It’s not only because it became the first time in our country’s history that an opposition candidate would defeat an incumbent president; that’s an unquestionably historic feat. But there’s even more impressive history elsewhere. There is the fact, for example, that you finally triumphed in a presidential election on your fourth try. There is also the fact that, for the first time in our country’s history, a political party with roots in Nigeria’s southwest aligned with politicians from different parts of the northern half of our country to win power at the center.

Your victory was also historic in that it aborted the goal of the Peoples Democratic Party (PDP), Africa’s largest political party, to rule Nigeria for sixty unbroken years. However, our consolation is that many of our great party’s original founders are now members of your soon-to-be ruling All Progressives Congress (APC). In a sense, then, the PDP has purchased shares in the APC, ensuring that our interests will continue to be served in the forthcoming dispensation.

As your immediate predecessor in office, and your dubious partner in the making of political history, I feel duty bound to offer you these parting notes about the lessons I have learned as a politician, president and commander-in-chief of the Federal Republic of Nigeria.

The most important lesson I would like to share is the last I learned as president. It is this: money can buy you endorsement, but hardly brings you votes.

As you well know, the moment the presidential election was postponed for six weeks, my campaign team and I hit the road, loaded with cash. By cash I do not mean naira, which has become as commonplace as tree leaves—and now serves as the currency only of Nigerian commoners. No, by cash I mean Nigeria’s official political currency, the American dollar.

Before the election was postponed, my team and I had ensured that you and your team had run out of money. And to be without money whilst running a political campaign in Nigeria is tantamount to a car without fuel but set on a marathon trip. That car, like a cashless political campaign, is supposed to get nowhere. That’s why I was surprised, indeed shocked, that you somehow found the momentum to win.

My campaign and I had done our best to press our dollar advantage. I visited numerous royal fathers in all the political zones of this country. At each stop, I dropped bags and bags of dollars. Trust me, it was a dollar bonanza, a bazaar of huge cash gifts. I netted numerous endorsements; I knelt down before many a traditional ruler and received their royal blessings. I also received a deluge of endorsements from the men and women who call themselves “political chieftains” or “stakeholders.”

Having spent dollars as if the currency was going out of style, I was confident that the election was clinched, my victory guaranteed. It never occurred to me that most of the so-called royal fathers I wasted dollars on did not even have PVCs. And, even if they had their voter’s card, that they have only one vote.

I never reckoned too that those who call themselves stakeholders are widely loathed in their communities, that they are men and women of shady reputation who would be tied to the stake and executed if their people had a say in their fate. On collecting dollars from me, the first thing some of these so-called stakeholders did was to buy first class tickets to jet off to London, New York or Dubai—before the election.

So let me warn you: the time when money can buy an election in Nigeria may be over. Over, I suspect, for good. I wish somebody had forewarned me before I squandered all that cash on PVC-less obas, obis, emirs, “chieftains” and “stakeholders.” All that cash would have brought me hundreds of thousands of votes—perhaps millions, even—had I spent it on projects that improved the lives of all Nigerians. So I learned the hard way, when it was too late, that the only endorsement that REALLY counts is that of registered voters, not that of wretched “royal highnesses” and fly-by-night stakeholders who relish to reap where they do not sow. I now know, when it was too late, that those who arrogate to themselves the name of “stakeholders” are often impostors. Every Nigerian, all 170 million of us, is an equal stakeholder in Nigeria.

My dear General, trust me, some of your political associates will come to you a minute or two after your swearing-in and begin to spell out what you must do to win reelection in four years. They will advise you to start stashing away billions of dollars for deployment in 2019. They will tell you need the cash to purchase media affection and to line up endorsements by “royal fathers” and all manner of “chieftains.”

I implore you: pay these advisors no heed. If mustering a huge chest of campaign cash were an effective strategy, I would have blown you out in a landslide on March 28. You know that I had enough dollars to drown you and all your supporters in a sea of cash. Yet, what good did all that money do me? Did I not still come out more than two million votes short? Mama Peace and I are packing up to vacate the Villa for your wife and you.

My counsel to you is this: Use every dollar of Nigeria’s revenue to work for the Nigerian people. I know: I did not follow my own advice. But I assure you I would have easily secured another four-year term if I had not listened to those who convinced me that the presidency would always belong to the person with the fattest, dollar-rest wallet. I wish now that I had spent all that hoard of dollars fixing Nigeria.

Another important lesson: in making appointments, always go for the people you trust, not the people thrust upon you. Again, I allowed different political interests to decide who became a member of my cabinet and who received other major appointments in my administration. The result was that I had many appointees whose loyalty was to the interests that foisted them on me, not to me. Sadly, when I figured out that some of these appointees were sabotaging the country and undermining me, I was remiss to fire them. I have paid for that failure.

Let me forewarn you, General Buhari, about flattery and other forms of inflation that, if you don’t take care, will be your doom. As a Nigerian president, you are condemned to living in a virtual “virtual” reality space. You are a stranger to the people you’re supposed to govern and lead (or, as we prefer to say and do, rule). Your advisors, ministers, aides, party “stakeholders,” prayer warriors, and contractor-friends work round the clock to keep you thoroughly blinded to the harsh reality of conditions in Nigeria. The first thing they do is to pump your vanity up.

In 2011, Nigerians said they hated the PDP but loved me. Today, they’re saying they adore you, even though they have misgivings about some of the crowd around you. Start from Day One to work for the Nigerian people, or you may find that their fury is even quicker than their affection. The pastors and imams and other lucre-seeking minions will admonish you to relax; they will declare you a savior of the Nigerian people even before you’ve lifted a hand to do one thing. Don’t let them fool you. There’s a lot of work to do for the Nigerian people. Our country’s educational system is so broken (the reason we ship our children abroad); there’s no healthcare (which is why our medical tourism dollars are enriching several foreign countries); our power sector continues to deteriorate, killing off industries and forcing Nigerians to buy more and more generators from Japan and elsewhere; and too many of our citizens, including graduates, now find jobs as armed robbers, kidnappers or political thugs.

Unless you wake up every day determined to roll up your sleeves and serve the Nigerian people, be assured they will turn against you and your party in four years—just as they did me.

Opinion: How Social Media Contributed To The Unprecedented Success Of 2015 General Elections in Nigeria