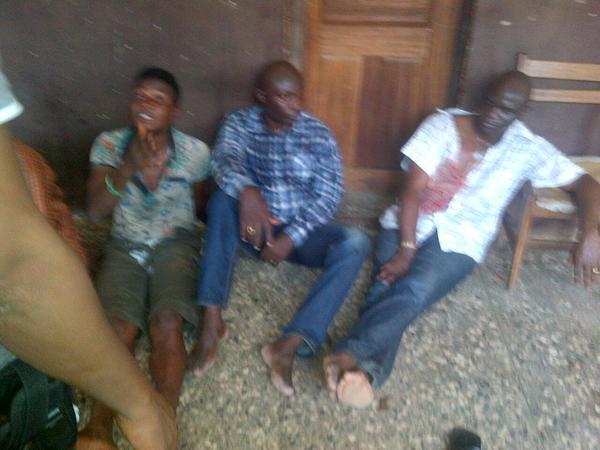 Ekiti State Commissioner for Works Kayode Oso, Special Adviser to the Governor on Political Matters Ademola Bello and four others were yesterday arrested by the police at the vicinity of the House of Assembly.

Reports suggest that Kayode Oso, Ademola Bello and the others were among the loyalists of Governor Ayo Fayose who laid ambush at the precincts of the Assembly complex, waiting for the 19 All Progressives Congress (APC) lawmakers. Also arrested are Adeyanju Oluwole, Raphael Adebayo, Babajide Adebayo and Wasiu Ogunsakin.

Police sources said they were arrested with one black colour Ford pick-up van with registration number EK 05-B27 and one blue Toyota Hilux van with registration number AA 363 YEK. The two vehicles which belongs to the state government, were carrying weapons, including nine live cartridges, 10 cutlasses, charms, fake US dollars, a carton of Regal dry gin, a parcel of Indian hemp and six small kegs of kerosene.

Some of the thugs in the entourage reportedly escaped during their encounter with the policemen. Police Commissioner Taiwo Lakanu could not be reached for comments on phone proved abortive as he did not pick his calls. Neither did he reply text messages sent to his cell phone as at press time.

Police spokesman Alberto Adeyemi, in a text message, said he was not aware of the arrest.

Just yesterday, reports from Ekiti state made it known that the 19 All Progressive Congress (APC) lawmakers pushing for the impeachment of the state governor, Ayo Fayose were dealt with by the officials of the Nigerian army.