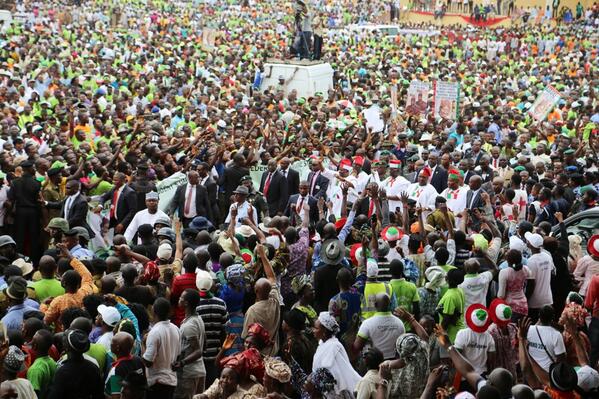 Scores of supporters of Ayodele Fayose, Ekiti state governor, on April 6, Monday, blocked the access roads to the state House of Assembly Complex.

This came as a reaction to the rumour about the alleged impeachment threat staged by 19 All Progressives Congress lawmakers.

To prevent the impeachment proceedings, the Peoples Democratic Party loyalists stormed the Assembly area around 8am.

The protesters were singing pro-Fayose songs and cursed the APC lawmakers.

Some prominent PDP members were also present in the area, including Deputy Governor Kolapo Olusola and former House of Assembly speaker, Olatunji Odeyemi.

The PDP members later turned the blockade into a roadshow. They were stopped from approaching the Assembly complex by the security, previously mobilised after the rumour emergence.

Lanre Ogunsuyi, Special Assistant on Information, Youth and Sports, addressed the newsmen saying that Ekiti people were ready to take control over their destiny and protect the mandate legally given to Fayose in 2014.

“The new Nigeria which President Goodluck Jonathan and Major Gen Muhammadu Buhari all campaigned for is the one that would respect the Rule of Law.

“With this convergence, you can see that the people are standing by their Governor. They are ready to defend their mandate.

“Nobody asked Omirin and other APC lawmakers not to come to the Assembly, they only decided to abdicate their duties since last year November 17.

“Impeachment procedure does not start and end with Assembly alone. The Judiciary is involved, so this plan is highly condemnable.

“We want to emphasize that they are welcome as long as they are concerned about making laws for the progress of the State, but if it was meant to come and impeach Governor Fayose, we won’t allow that.”

He continued with calls for peaceful resolution of the issue:

“We don’t want any unwholesome issue because the task of developing Ekiti is an onerous task that needed to be pursue with vigour. The Governor doesn’t want any distraction and that is why he has been pursuing peace at all times.

“We want some measures of decorum in Ekiti; we are not proud of the era whereby we had three governors within a week. We want a stable government and that we will continue to pursue for Ekiti to be at peace.”

It should be recalled that speaker Dele Olugbemi had previously denied any plot to remove Fayose. He insisted that it was simply an attempt by the APC to distract the government of the state.