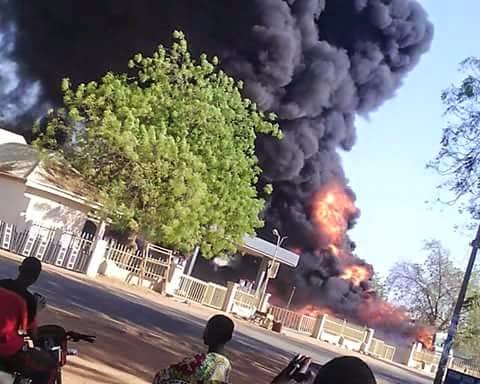 It has been quite a crazy and chaotic day in Lagos. Almost too dramatic to be true in barely 24 hours. The entertainment capital of Africa has seen too much drama for one day. From the sight of several soldiers on the streets of Surulere; there has been reports of two infernos and a robbery attack; all in what has been a thorny Thursday.

According to several reports on social media platform, Twitter, there is serious robbery going on at the moment in the Carter Bridge. There is also a heavy gun battle going down with people running in fear. Some said political thugs are being chased by police men. For now, avoid the place.

Perhaps, triggered by the fire reportedly close to the area. Earlier, reports came in that some parts of popular Oyingbo market had gone up in flames. The fire started from the section of the market close to Carter Bridge and is said to be spreading. Men of the Lagos fire service are being expected, as at the time of this report.

Similarly, a blistering inferno was reported at the Ascon Filling Station in Lekki Phase 1. Men of the fire service arrived the scene and did their best to stop the fire which had spread to the Round-about and the Lekki-Ikoyi bridge. The fire destroyed multiple cars on the road. Some of the pictures from the crazy day in Lagos below;