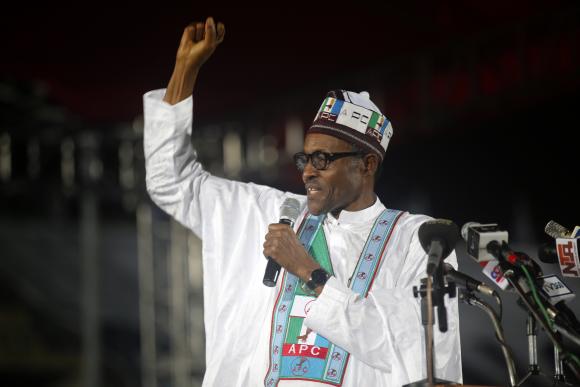 The leadership of political parties; Independent Democrats and United Progressives Party, have denied pledging support for the All Progressives Congress (APC) and adopting her candidate, Gen. Muhammadu Buhari for the March 28 presidential election.

It would be recalled that 12 opposition parties reportedly pledged allegiance to the APC to enable it win the election.

The National Chairman of the Peoples Democratic Movement, Bashir Ibrahim, who led representatives of the parties on a solidarity visit to the APC presidential candidate, Muhammadu Buhari, on Wednesday, said they would stand with the party by insisting that the right thing is done to ensure credible polls.

However, in a statement by its national director of operations, on Thursday, the ID protested its inclusion in the list of the parties, stating that it had since adopted President Goodluck Jonathan, the Peoples Democratic Party candidate in the presidential election, as its candidate.

“Let it be known that we had earlier on 11th December, 2014, adopted President Goodluck Jonathan as our party’s presidential candidate in a national convention monitored by the Independent National Electoral Commission.”

Also in a statement by the Director General of Chekwas Okorie Presidential Campaign Organisation, the UPP denied pledging loyalty to the APC.

The party explained that in its inaugural national executive committee meeting of November 13, 2012 published in a Communiqué, the party zoned its presidential slot to the South-East geopolitical zone of Nigeria.

“This policy statement was actualized on the 11th of December, 2014 at the Party’s National Convention held at Aba where Chief (Dr) Chekwas Okorie and Alhaji (Barrister) Bello Umar emerged as Presidential and Vice Presidential Candidates respectively,” the party said.

“Our party commenced campaign for the coveted office of president thereafter with as much commitment and diligence as it could muster.

“It is a common knowledge that our Presidential Candidate Chief (Dr) Chekwas Okorie has emerged as one of the three foremost contenders for the office of President of Nigeria.”

The UPP said its strategy of grassroots mobilization and strong and powerful message in the well-articulated “Revolutionary Agenda” of its presidential candidate had brightened its chances of winning the presidential election tremendously.

“The fact that UPP has restored the missing Third Leg of the Nigeria political tripod is now of common and public knowledge,” it said. “It is therefore inconceivable, malicious and wicked political blackmail to drag the name of our party to a gang-up we know nothing about.

“We have tried to the best of our ability to avoid hate-speeches, campaign of calumny, denigration of elder statesmen and public office holders and the use of acerbic language likely to heat up the polity in all our campaign up till this time.

“We wish to maintain this attitude of decorum and civility and plead with those misrepresenting us not to provoke us into joining the bandwagon of political desperadoes who create confusion and trouble where none exists. We doubt very much if the leadership of APC is party to this absurdity.”

The UPP, however, explained that it had nothing against any group or party wishing to support any of the foremost political parties, including supporting the party.

“But it smacks of political misconduct and criminality to drag the name of a foremost Political Party like the United Progressive Party into a conspiracy we know nothing about,” it said.

It assured Nigerians, its supporters and members nationwide Mr. Okorie “is very much in the race for the 2015 Presidential Election in Nigeria on the platform of the United Progressive Party with the head of tiger as its symbol.”