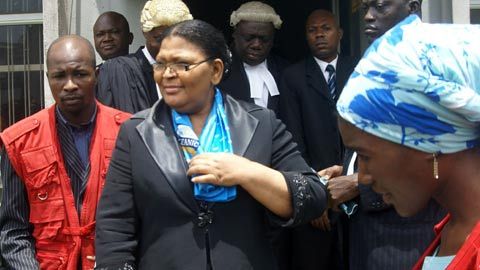 An Abuja Federal High Court has today (Thursday), fixed April 22 for hearing in a suit filed by Managing Director of the defunct Oceanic International Bank Plc, Cecilia Ibru?, challenging an alleged illegal implementation of the terms of the plea bargain and settlement agreement leading to her conviction in October 2010.

Hearing in the matter which is before Justice Ahmed Mohammed, was stalled by the strike embarked upon by judiciary workers in January.

Ibru and other plaintiffs had filed the suit urging the court to nullify the striping of the assets and the subsequent sale of Oceanic Bank International Plc to Ecobank Plc as same was not part of the plea bargain and settlement agreement which she signed as basis for her conviction.

They urged the court to declare the sale of the defunct bank “a sham, misconceived, mischievous and of no legal consequences.”

?The plaintiffs also urged the court to declare that Aero Contractors Nigeria Limited was not on the list of assets she forfeited to the Federal Government as part of her plea bargain.

They asked the court to declare that any attempt by Asset Management Corporation of Nigeria to “take over the airline or attach its assets as ultra vires and of no legal consequences.”

Apart from Ibru, who acts on behalf of herself and Ibru Groups, other plaintiffs in the suit are Sidochem Industries Ltd., Edgar Sido and Dr. Francis Sido.

The plaintiffs sued the Attorney-General of the Federation and AMCON as the defendants.

They had filed the suit following an ex parte order obtained by AMCON from a Federal High Court in Lagos on November 12, 2014 against Sidochem Industries Limited and the company’s Managing Director, Mr. Edgar Sido, and two others for the recovery of a N433.5m allegedly owed the defunct Oceanic Bank, which AMCON had acquired.

But the plaintiffs in opposing the order, empowering AMCON to take over some assets linked to the compnay, including Aero Contractors, argued that the corporation had mischievously obtained the ex-parte order without disclosing material facts contained in the plea bargain agreement she entered with the Federal Government.

Sidochem Industries Limited and its owners are also opposing the implementation of the order obtained by AMCON on the grounds that the debts they owed the defunct bank was amongst the matters resolved in the plea bargain which Ibru entered into.

The Federal High Court in Lagos had on October 9, 2010 convicted and sentenced Ibru to 18 months imprisonment after she pleaded guilty to three counts of negligence, reckless grant of credit facilities and mismanagement of depositors’ funds.

Over N191bn worth of asset was seized from Ibru in line with the plea bargain agreement.