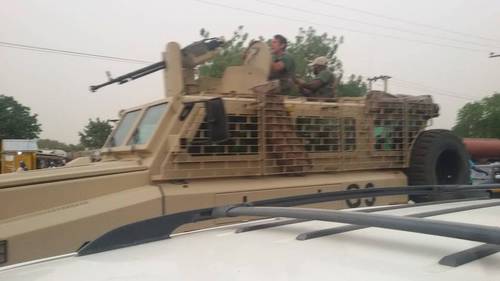 Top military commanders in the country have unequivocally stated that the so-called ‘mercenaries’ spotted in Nigeria, are foreign technical advisers that are providing trainings and instructions on the use of new armaments recently procured by the Nigerian military in the war on terror.

This is to dispel the reports that mercenaries were brought in by the Federal Government to augment the failings of the Nigerian troops in the battle against insurgency in the country.

Some top commanders, who pleaded anonymity, insisted that it is part of propaganda to paint Nigerian military as incompetent to deal with the insurgency by desperately ascribing recent spate of successes to ‘others’ rather than the gallant troops’ efforts.

The source recalled that only recently, some news agencies ascribed such successes to Cameroonian, Nigerien and “battle hardened” Chadian forces but when it became obvious that the forces of those countries were mainly fighting along their own border areas blocking free movement of terrorists, “it became necessary to look for others” who are helping Nigerians to fight.

It was also gathered that the foreigners spotted in Maiduguri and other areas close to the theatre of wars are technical partners who are helping to train Nigerian forces on how to operate and maintain the recently acquired equipments which came from different sources.

The source further cited the particular example of the maintenance technician, who died recently insisting that he was not even a combatant but a professional in fixing armour vehicles.

President Goodluck Jonathan was recently quoted in an interview with Voice of America (VOA) confirming that Nigeria has some trainers helping to get troops well acquainted with the recently acquired weaponry.

According to Jonathan, “we now have this technical people who are trainers and technicians, who are to train our people on how to use them, and technicians that help the maintenance, at the same time training our people how to maintain this equipment,” adding that two companies were involved in the training.

The source recalled with regrets, the several years that Nigeria wasted while negotiating and appealing for equipment supply from the Western allies which were not only rebuffed but prevented other countries under their direct influence from selling to Nigeria.
“The fact that we have foreign experts outside the United States helping to train our troops is not a secret but it is not fair for them to embark on this blackmail simply because we got assistance from other places when they turned us down at a critical period”, the source stated.

When contacted on the story that mercenaries are fighting the battle for Nigeria, the Director Defence Information, Major General Chris Olukolade said “Sorry, I don’t have anything about that claim. I just know that Nigerian military and security forces are putting in all their resources, training and experience acquired over the years to address the security challenges.

“Our neighbours operating under the auspices of the Multinational Joint Task Force are also backing our efforts from all our borders with them. We also have some offer of training and intelligence assistance from foreign countries. Some of these arrangements even predate the present operations.”

Bayelsa Boils Into Tension As One Dies And Several Are Injured In Youths Clash With Gov. Dickson Over Pipeline Contract

Four Dead In Gun Duel Between Policemen And Robbers; After Bank Robbery In Lekki