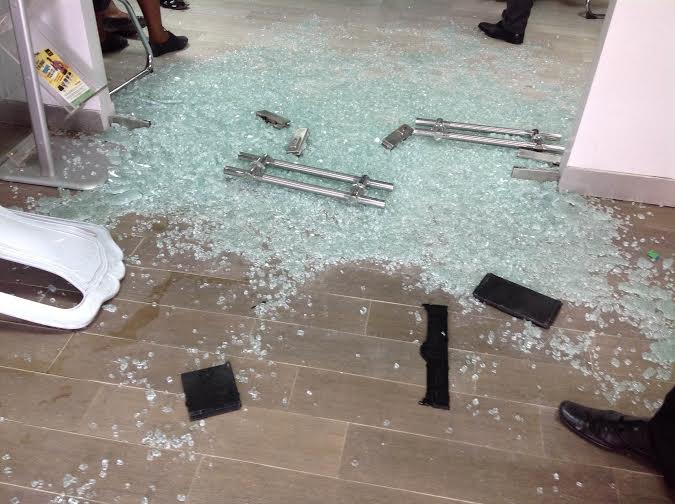 A gun battle between Policemen and a gang of robbers, on Thursday evening in Lekki, left four people killed. when a gang of armed robbers invaded the branch of First City Monument Bank (FCMB) at Plot B, Waterfront Plaza, Admiralty Way, Lekki Phase 1, Lagos state.

Eyewitness account revealed that the four people were three police escorts of a passing civilian Coaster bus and a fish seller.

The robbers, numbering at least 12, arrived a few minutes before 5pm via a boat, and immediately began firing gunshots into the air in an operation that lasted exactly 25 minutes.

“It was a well-coordinated attack,” the witness said.

“The robbers arrived in military camouflage and immediately distributed themselves, three of them manning each of the four exits of the bank. As I am talking to you now, the bodies of the three policemen that were killed are still on the ground.”

He added that after forcing their way into the banking hall, the robbers immediately announced their intention, and everyone cooperated with them.

“Nobody was killed inside the bank because once they announced that they were robbers, everyone, including bank staff, cooperated. All the four people killed were shot outside. The fish seller was crossing the road while the robbery was going on.

“So it was a successful operation for them, because they made away with a lot of money. They even hacked into the ATMs and carted away the money stuffed there.

“When they finished, they escaped using the same speed boat the came with.”

The robbery attack enthroned fear in the area, as people abandoned their cars on the road and scuttled to safety, causing traffic obstruction that last well over an hour after the attack.”

Another eyewitness, revealed that, the shootings began after robbers had robbed the bank at Lekki phase 1 and attempted to escape through the link bridge to Ikoyi when they encountered policemen.

It was learnt that motorists abandoned their vehicles on the bridge and fled while the shooting lasted.

The eyewitness, who identified himself as Tayo, said, “Around 4.45pm, I was driving to my office in Ikoyi from Lekki but when I got a spot on the bridge, I heard sporadic gunshots. Fortunately, policemen at the tail end of the bridge inwards Ikoyi, shot back.

“We all came out of our vehicles and laid on the floor to avoid being hit by stray bullets. At some point, some of the policemen were overwhelmed by the fire power of the robbers and had to flee.

“The robbers later jumped into a speed boat and escaped through the water.”

Kayode Aderanti, the Lagos state commissioner of police, who visited the the bank, said the police was assessing the situation and promised that the robbers would be apprehended.

U.S To Parley With Nigeria Over Boko-ISIS Alliance