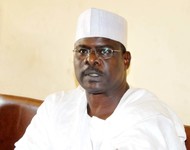 Ndume told Daily Trust on the telephone yesterday that Governor Shettima chattered the plane from Gombe to Maiduguri and Abuja.
However, on arriving at Maiduguri, the flight crew asked him to disembark as according to them, they were not informed about proceeding to Abuja.

According to him, shortly after Governor Shettima left the airport, the crew asked them to leave the aircraft as they were to proceed to Akure and not Abuja.

“I put a call to the chairman of the senate committee on Nigerian Airforce who tried to intervene but to no avail. They have now exposed me to unnecessary security risk as I have to travel back to Abuja by road tomorrow (today) morning,” he said.

Ndume said he pleaded with the crew to take him to Akure as it would be easier to get to Abuja from there but they refused.

The lawmaker who chairs the Senate committee on Millennium Development Goals (MDGs), said he had scheduled the 2015 budget defence of his committee for today but regretted that he could not make it again.

Last year, Ndume was stopped from boarding a plane from Maiduguri to Abuja in a similar incident by the security agencies
Attempts to reach the Nigerian Airforce last night were not successful.

INEC May Jettison Card Readers Use; Jega To Meet With RECs On Wednesday For Crunch Decision