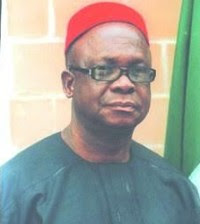 The Ebonyi State Government has accused the Economic and Financial Crimes Commission and management of Fidelity Bank Plc have grounded it making it difficult for the state to pay workers’ salary.

The state’s Attorney General, Ben Igwenyi, said both EFCC and Fidelity Bank were working with some of the government’s political enemies to paralyse the state.

The allegation is contained in a suit it filed against the EFCC and Fidelity Bank, before the Federal High Court, Abuja.

Igwenyi along with the state’s 13 local governments had filed the suit, FHC/ABJ/CS/11/2015, seeking among other prayers, court’s declaration that the power of the EFCC to freeze its account exercised through Fidelity Bank was unlawful.

The plaintiffs are with the suit, challenging, among others, the decision by the bank to freeze its Joint Local Government account No: 5030027464 (held in the bank) allegedly on the directive by the EFCC.

The plaintiffs, in a supporting affidavit, stated that the basis for the freezing of the account of the defendant is politically motivated by political differences.

The affidavit read in part, “The act of the defendants in freezing the afore-described account has gravely and adversely paralysed the administrative activities of the state and its Local Government Councils.

“The administrative paralyses engendered by the defendants is dire, especially because civil servants can no longer be paid their salaries and therefore, there are not funds to run the day-to-day affairs of the 13 Local Governments in the state.

“The inability to pay workers has precipitated into a build-up of temper and outburst of emotions among civil servants against the government of Ebonyi State and the Local Government authorities.