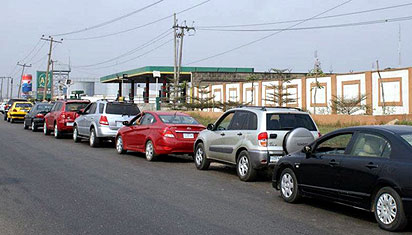 The APC Presidential Campaign Organization (APCPCO) has condemned the recent and sudden emergence of fuel scarcity and fuel queues in the Federal Capital Territory, Abuja and some parts of the country, as well as the recent gross reduction in the hours of electricity supply across the country by electricity providers describing it as sad reminders of the failure of the PDP Federal Government.

The party wondered how a political party which has been in power for 16 years and which is unable to ensure that its citizens enjoy regular fuel supply being an oil producing and endowed country and electricity having privatized the power sector and given generous financial assistance to operators of the power sector can still feel confident to seek another term in office.

In statement issued on Sunday and made available to NewsWireNGR by Mallam Garba Shehu, Director of Media Publicity of the APC Presidential Campaign Organization, the party said that the glaring and inexcusable failure of the PDP government in these two important areas is a sign of gross ineptitude, maladministration and corruption which is responsible for the sorry economic state the average citizen of Nigeria has found themselves.

For the people of Nigeria to be again confronted with the specter of fuel scarcity so soon after the harrowing experience of last Christmas period shows that the Jonathan government can never get anything right as Nigeria will continue to be an embarrassment among the oil producing countries of the world. The issue is that being unable to set up even one new refinery in the past five years and unable to get existing refineries to function up to 50 per cent capacity, the people of Nigeria surely need another set of people to be in charge of affairs. Those who man the two critical sectors of fuel and power are cronies of President Jonathan and supporters of the PDP that they have no reason to discharge their mandate in favour of the Nigerian people.

We all remember the hype and fanfare with which the privatization of the power sector was carried out and yet majority of Nigerians are having less electric power or none at all but are forced to pay outrageous electricity bills to the operators of the power companies who are either card-carrying members of the PDP or are close associates of President Jonathan.

To add insult to injury, the Jonathan government has also given billions of naira to these operators under the guise of assisting them to improve power supply, without result. And this happened after the sector had been sold and the facilities handed over to these private operators.

We of the APC demand that the Jonathan government and his party explain to Nigerians the reason why fuel scarcity and blackout should persist making life a hell for Nigerians, despite huge investments and policies put in place to eradicate these problems.