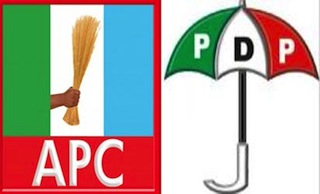 The Peoples Democratic Party (PDP) and the All Progressives Congress (APC) have opposed a suit challenging the decision by the Independent National Electoral Commission (INEC) on the use of the electronic Permanent Voters Cards (PVCs) in the general elections.

The suit was filed by the Society for Advancement and Protection of Public Rights (SAPPR) and it came up for mention at the Federal High Court in Abuja, on Monday.

It is challenging the power of the INEC to use of the electronic voting system without legislation by the National Assembly.

According to the group, the electoral umpire cannot evoke an administrative fiat. It said the electoral body’s actions were illegal, null and void.

The suit filed by the SAPPR seeks to restrain the INEC from using the PVC and card readers for the forthcoming polls, on the grounds that they were likely to lead to the disenfranchisement of eligible voters.

However, the PDP, APC, General Muhammadu Buhari and the Incorporated Trustees of Physical and Civil Rights Enlightenment Foundation sought to be joined as co-defendants with INEC, to oppose the suit.

Lawyer to the litigants, who did not oppose their applications for joinder, however, wondered what injuries the suit would cause the various parties challenging the suit.

The judge adjourned the suit till March 18 for mention.

The general elections have been rescheduled to hold on March 28 and April 11 from an earlier date of February 14 and 28 and the INEC has insisted that only voters with the Permanent Voters Cards would be allowed to vote.

Related Topics:politicsPeoples Democratic PartyAll Progressives CongressSociety for Advancement and Protection of Public Rights
Up Next

We Must Stop Buhari Before He Sends Us To Jail – Senator, Zwingina