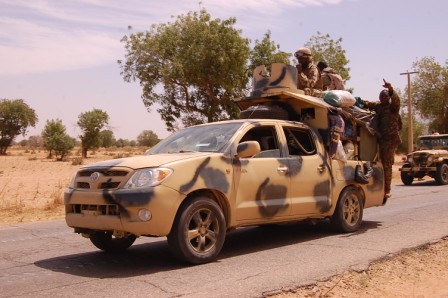 The Defence Headquarters (DHQ) has disclosed that the Nigerian military, in its ongoing mopping up operations in the strategic town of Baga, has uncovered heaps of arms and ammunition abandoned by the defeated and fleeing Boko Haram terrorists.

The Director of Defence Information (DDI), Maj-Gen. Chris Olukolade, confirmed this is a statement on Sunday with pictorial evidence of a stockpile of various weapons abandoned by the insurgents.

According to Olukolade, “Troops engaged in cordon and search in Baga continue to discover more arms of various backgrounds and shapes abandoned in some houses and the surroundings by fleeing terrorists.

“Heaps of weapons most of which were strange-looking or destroyed are still being gathered. Many abandoned or destroyed motorcycles have also been discovered”.

Unfortunately, he stated, a soldier was stabbed while another was shot during a close quarter battle which ensued as troops involved in cordon and search caught up with some of the fleeing terrorists on Sunday evening.

As part of the mop-up operation, the Defence spokesman said that a number of individuals who claimed to be residents are also being interrogated in order to ascertain their identity and motive.

He said that a group consisting mostly of women continued to hail and cheer the troops as they conduct a thorough search in the area.

“Wanting to be sure the group was not working for the terrorists despite the excitement, they had to be placed under watch.

“The cordon and search as well as patrol of the localities continue while the offensive on terrorists is progressing in other areas of the theatre of the counter terrorist campaign”, he added.