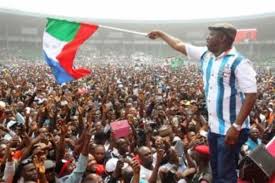 All Progressives Congress, APC, governorship candidate in Rivers State, Dr. Dakuku Adol Peterside, has called off his planned campaign tour of Ogu/Bolo local government area billed for Wednesday. Dr. Peterside was attacked on Tuesday by heavily-armed gunmen believed to have been led by Mr. Evans Bipi, a Personal Assistant to Mrs. Patience Jonathan, wife of Nigeria’s President. Not less than 2 persons, including a police man, have been confirmed dead and their bodies deposited in mortuaries. Dr. Petertside has since visited the hospitals, including the Braithwaite Specialist Hospital, Port Harcourt where he broke down in tears.

In a statement by Ibim Semenitari, Director of Communications, Greater Together Campaign Organisation, the decision to cancel the Wednesday rally was in honour of the dead. “The decision to call-off the Ogu/Bolo campaign by Dr. Dakuku Peterside, the APC Governorship candidate, was in honour of those killed by the gunmen who attacked the APC campaign on Tuesday in Okrika. Dr. Peterside is grieved over the losses and has sympathised with the families of those killed while wishing the injured quick recovery”.

The statement further explained that Dr. Peterside and the APC stood firmly by the non-violence Peace Accord signed by political parties in Rivers State brokered by the Embassy of the United States of America in Nigeria.

“Despite this deliberate, well-co-ordinated attack on the APC governorship candidate and APC supporters, the candidate and party stand firm to the spirit and letter of the Non-violence Peace Accord brokered by the American Embassy in Nigeria.

“The Greater Together Campaign Organisation condemns the attack and disruption of the APC campaign in Okrika, while commiserating with families that lost their loved ones and breadwinners. That is the tale of woe the Peoples Democratic Party, PDP, has imposed on Okrika people, which is unacceptable and must be broken through the peoples’ collective resilience”, Semenitari added.