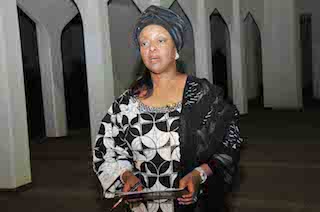 The Peoples Democratic Party in Bayelsa State is experiencing a mini crisis, over a N40 million largesse given the state chapter, by Minister of Petroleum Resources, Mrs. Diezani Allison-Maduekwe. This has culminated in the suspension of its Chairman, Col. Sam Inokoba (retd.), over alleged financial impropriety.Inokoba was suspended by the members of the State Working Committee on Wednesday for alleged misconduct and diversion of N40m gift provided for the party by Mrs. Allison-Madueke.It was learnt that the decision to suspend Inokoba was taken on Tuesday after deliberation by members of the State Executive Council.Publicity Secretary of the PDP in the state, Mr. Osom Makebre, who confirmed the suspension, declined to give further details. However, he explained that the decision of the SEC had been forwarded to the national leadership of the party for ratification.
Makbere said in accordance with the party’s constitution, it was expected that the Deputy Chairman of the party, King Serena Dokubo-Spiff, would take over the running of the party within the next 30 days.A source at the meeting said the suspended chairman had been invited to appear before the enlarged State Executive Committee (SEC), but that he declined and reportedly travelled to Abuja.According to the source, SEC members deliberated on a five-count charge of misconduct levelled against Inokoba.The Suspended Party chairman, Inokoba was also accused of refusing to join in the ongoing campaigns for candidates of the Bayelsa Central Senatorial district because the candidates were not his choice.
The party source, who craved anonymity, said, “He has since neglected to carry out his official duties as party chairman. He sponsored aspirants during the party primaries instead of engaging in neutrality as the chairman of the party.“He also publicly, in the presence of party members, ordered his security aides and thugs to beat a party member due to dispute over party primaries materials.“He also engaged in promoting factions within the state PDP and engaged in financial dishonesty with funds provided by members of the PDP from the state and national level.”But reacting to the suspension, media aide to the suspended chairman, Mr. Nelson Agadi, described the suspension as illegal and “a sponsored action.”“The suspension is a lie that cannot hold and it is a violation of the Section 10 sub section 7 of the party constitution,” Agadi said.

The National leadership of the PDP is yet to issue an official statement on the issue or shown any sign to wade into the current fiasco rocking the state chapter of the PDP, in the President’s home state.