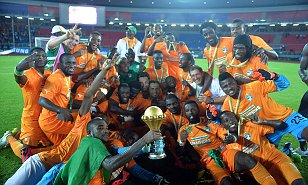 The match ended goalless after 90 minutes, after both sides failed to find the net. Even in the extra time, both sides remained deadlocked, with the few.half chances spurned by both sets of strikers. Thus, the final had to be decided on penalties.

Wilfried Bony smashed his spot-kick against the crossbar but the Elephants recovered in the shoot-out, eventually taking the title when goalkeeper Boubacar Barry saved from his opposite number Razak Braimah and then stepped up to score.

It was an exciting end to a game that had been anything but, with Premier League stars Bony and Yaya Toure unable to create enough to win the game in 90, or even 120 minutes.

Ronaldo Did No Wrong By Partying After Huge Loss – Mendes