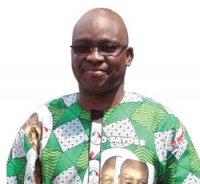 Ekiti State Governor, Mr Ayodele Fayose has described the audio clip released by the All Progressives Congress (APC), through its media organ, SaharaReporters as fake, saying; he never held any meeting with anyone to rig the June 21, 2014 election, suggesting that his voice & those of others could have been faked using technology like Natural Voices.
He said the audio clip was APC’s new calculated attempt to discredit the election results, having failed woefully both at the poll and the tribunal.

Chief Press Secretary to the Governor, Mr Idowu Adelusi said in a statement issued on Friday that the APC would have used the audio clip as evidence at the tribunal if it was genuine.

He said; “Nigerians should be reminded of how the APC people lied in 2007 that they recorded how the governorship election was rigged even in the palace of the Ewi of Ado-Ekiti, Oba Rufus Adejugbe, but the party could not produce a single photo evidence at the tribunal because their plans to do what is know as Morphing and Syncing was exposed.

“Nigerians should also be reminded of the existence of a technology called speech software, which is good at reproducing the sounds, inflections and intonations of a human voice.

“The APC that we all know is a party of crooks, who are capable of doing anything, no matter how criminal to achieve their aim.
“They tried all tricks to manipulate the election and failed. Even after wining the election, they tried to prevent Fayose from assuming office but failed.

“Now it is a fake audio clip, which is obviously targeted at the next week presidential election.

“Another question that should be asked by discerning minds is; if indeed such a meeting took place, could any of those purported to be present at the meeting have recorded the conversation and leaked it to the APC? Or was the supposed secret meeting held in the public such that it was possible for the conversations to be recorded?

“This fake audio manipulated with the use of Nigerians, especially the people of Ekiti who overwhelmingly voted Fayose as their governor should therefore ignore this new fabricated lie coming from the APC.”