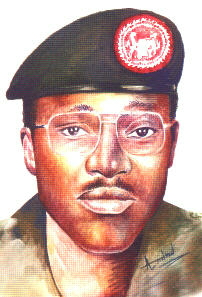 Our democracy,which was not given too much hope of survival at the beginning in 1999, is maturing. I guess too that our desire is to let it remain mature and nothing more. We therefore have a responsibility to preserve it from too much body heat so that it doesn’t get over mature or over ripe and then drop off the branch as some rotten stuff. It is the reason I am appealing to all stakeholders to live in a manner that will ensure the survival of this democracy, even as it gets more mature.

The sign of this maturity is most pronounced in the intensity of the ongoing campaignsfor votes. Jonathan, for instance, has temporarily suspended his residency at Aso Rock Villa, as he runs around to save his job on February 14. Nothing is taken for granted these days even with a PDP ticket. Every vote will be earned. To that extent, our democracy has risen so fast to almost stand on equal pedestal with America’s. To God be the glory.

Buhari too is struggling hard to keep pace. He has refused to accept that his age is a limiting factor in the campaign frenzy. One opponent has alleged that to retain breath, Buhari has adopted a stress management strategy that forbids him from holding the ground for too long (usually between five and 10 minutes) at campaign rallies. Literally across board, governance is on recess till the elections are put behind on February 28. It is good. Everybody is sounding larger than life. But the choice is for the people to make.

Some people have said that General Mohammadu Buhari is the best the North and the APC can offer in this age and time to unseat the incumbent President, Goodluck Jonathan and rule Nigeria in righteousness. Fine; they are in order. Some countries in the world are ruled by members of just one family. In those countries leadership usually passes from father to son or from one brother or cousin to another. The rest are told that the Almighty Allah Who gives power has found only one family among the lot worthy to consolidate power till eternity.

The situation is slightly different in Nigeria. Instead of making power hereditary and consolidate it in one family, it is recycled such that a man can take a turn now, break off for a while due to whatever reasons and return after 30 years to continue from where he broke off. I do not know if this can be counted as an advantage or a disadvantage. I am of the opinion that transmission of leadership from father to son is in a way progressive. The mere fact that power is flowing from an older to a younger person suggests dynamism, progressiveness and some form of forward movement.

If you ask me, I will say we should search for one good family in Nigeria to consolidate power where it can flow from old blood to new blood. It is the only way to break this unending recycling of old men. It is stagnation by another name because it allows for one man to be coming and going out of power like abiku. Right now, a man who came to power and left when he was only 43 is threatening to reincarnate after a 30-year lull at age 73, to continue his old ways.

Anyhow it is viewed, the narrative would have been more interesting if Buhari’s first or any of his sons had been chosen by APC to succeed his father and do battle with Jonathan. If he doesn’t have a son that fits squarely into the bill, the party can source a regent to hold the forte until his son is capable to take over. The APC would have been applauded if it had appointed Mallam El Ruffai as a regent to the Buhari throne. Now, Nigerians are stranded between the devil and the deep blue sea because the APC has decided to recycle Buhari.

It is not as if leadership recycling is a new policy in Nigeria. Gen Olusegun Obasanjo has been successfully recycled and Gen Ibrahim Babangida is still waiting to be recycled after one or two failed attempts. By God’s grace (since it is only God that gives power and to whomever He pleases irrespective of credentials), IBB will be successful some day. Sincerely, this idea that Nigeria cannot move beyond some retired and tired army generals is driving me crazy much as I try to maintain a straight head.

In the build to the 1999 presidential election, General T.Y Danjuma had threatened to go on self-imposed exile if Obasanjo failed to make the presidency. In the end, Obasanjo won and the Taraba-born former Chief of Army didn’t have to live through the frightening prospect of abandoning his multi-billion dollars investments in Nigeria for a life as a political fugitive. We are at the threshold of another epic presidential election after 16 years and although the general has not openly declared his preference between Jonathan and Buhari, the way he did between Obasanjo and OluFalae in 1999, his body language has remained a pointer.

Instead, it is another retired general, Ibrahim Badamosi Babangida who is in line to be recycled that has spoken about a robust group spirit that is difficult to betray even in these trying times. To me, IBB has not spoken loud and clear enough. Somebody from that group should speak the same manner that Danjuma did in 1999. I want to hear a declaration that the colony of retired generals shall disband and go on self exile if General Buhari fails to win the February 14 presidential election.

I can’t remember the last time I successfully went through a two-day dry fasting without buckling, but believe me, you, I shall attempt a 14-day spree between now and d-day to seek the Almighty’s endorsement if either Danjuma, IBB, Abdulsalami or any other member of that privileged club comes on air to proclaim the exile option if Buhari is defeated by Jonathan. I do not want to be misunderstood; I am not saying this because I love Jonathan to win the election. I am only looking at the larger picture. I mean the refreshing wind of freedom that shall blow through the polity, right from the states through the Senate to the Presidency, if all the retired generals are collected in one basket and cast overboard.

The flip side of this scenario is for the rest of Nigerians to go on exile if Buhari wins, to create a complete concept of sustained militocracy– government of the military by the military and for the military. Seriously, things have to be streamlined to enthrone equity and fair play in this business of leadership in Nigeria. Soldiering and politics remain the two most lucrative enterprises in Nigeria. For fairness, each should be operated by a different set of players. What the military has done so far is to collapse the two business platforms into one and then dominate the arising space as coup plotters and as politicians.

This is not fair. They are having the best of both worlds. By reason of the February 13 1976 failed coup in which former Head of State, General Murtala Ramat Mohammed, himself a beneficiary of the July 29 1975 coup that dislodged General Yakubu Gowon was killed, Obasanjo became Head of State. He returned as a heavy weight politician in 1999 to re-occupy the space he had vacated 20 years earlier. This is precisely where we are with Buhari.

After him, IBB may come even as Senate President, David Mark remains so visible on the recycling graph. This is growing into a very strong pattern in party politics in Nigeria and it is not sound judgment to ignore it. My suggestion therefore is that being a former military head of state should be impeded in the constitution as the sole requirement for contesting the presidency under a democratic setting.

If this is carried, the bigger advantage is that the four-yearly mayhem will be contained. Instead of a motley crowd struggling to become Nigeria’s president through the electoral system every election year, only a handful, namely Buhari, IBB and Abdulsalami Abubakar will be eligible. Obasanjo may wish to re-incarnate for a record third or fourth time after another 20 years, beginning May 29, 2007.