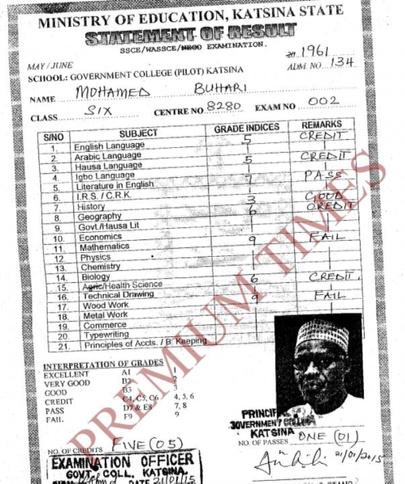 It took well over a month for General Muhammadu Buhari to produce a statement of result – not the certificate that is required to attest to his claims of graduating from a secondary school. What does this spell for Nigeria?

For a man whose sole claim to popularity is morality, it means several unwholesome things. One, it took a crusading of the press – the press that Buhari loathes so much as he demonstrated with Decree No. 4 in 1984 – to force Buhari to present something that is not a certificate. Were it not for the voices on the different social media that joined the traditional newspapers and television, one can be certain that Buhari, true to his nature, would not care to respond.

Gen. Buhari treated Nigerians to different versions of lies in this Certifigate. At first, he said that his certificate was with the Nigerian Army. But the Army denied this, stating instead that it has no reason to be in possession of the former military head of state’s secondary school credentials. At that point, it was evident to the discerning mind that something was amiss.

Recently, too, a newspaper enjoying the support of the All Progressives Congress (APC) published a statement of result, supposedly obtained from the former general’s secondary school, Government College Katsina. But the veracity of that statement of result, also, has been refuted by the West African Examinations Council (WAEC) as it stated that the former dictator had not applied to it for any result. What this means is that Buhari does not have any result documented by the WAEC.

Even though Gen. Buhari is seen as a saint in whom no wrong deed can be found by some Nigerians, some of his antecedents, coupled with the Certifigate have shown that this is not so. To those who really know the general, he is as fanatical as hardliners come and incapable of showing mercy where it is needed.

The former military head of state’s characterization as someone with zero tolerance for corruption is a fallacy. His reluctance to admit that he never completed his secondary school education is, indeed, corruption of the mind.

Truth be told, Gen. Buhari is, to a certain extent, intolerant of corruption as he is deeply biased in his handling of corrupt persons. His records show that he is inherently bigoted and tribalistic in dealing with people in general.
Gen. Buhari’s resume when he was a military dictator regarding how he handled civilians from the Shehu Shagari administration clearly shows that he has an agenda against people that are not of Fulani/Hausa extraction.

After toppling a democratically elected government on December 31st 1983, citing excuses for the administration being corrupt, Buhari went on to arrest several politicians. Even though humans generally have a short memory, many Nigerians, particularly southerners, have not forgotten that while he chose to place Shagari, a northerner, under house arrest, Dr. Alex Ekwueme, an Igbo man and the vice president, was jailed at the Kirikiri Maximum Prisons.

What is even more shocking is that Buhari’s corruption was able to thrive while he was a military dictator largely because he scarred the media by jailing several journalists and locking media houses up. Buhari has not hidden his hatred for the press. As military head of state, Buhari did not waste time to keep journalists in chains out of fear that they would empower the people with information. In spite of the fact that his military regime was welcomed by the press at the time he took over power, Buhari wasted no time to manifest his pathological hatred of the media.

After barely three months as head of state, he imposed the controversial Decree No. 4 on the Press. The essence of the decree was to effectively intimidate and reduce the press to a toothless bulldog that could neither bark nor bite. In January 1984, Buhari informed the National Concord newspaper that he did not trust journalists and vowed to checkmate the Freedom of the Press. His main grouse was anchored on the reports of the press on the missing $2.8 billion oil money. There are reports that show that the missing $2.8 billion oil money, which happened while Buhari was NNPC chairman, was the reason he overthrew the Shagari administration as he was on the verge of being exposed.
Under Decree No. 4, two reporters, Tunde Thompson and Nduka Irabor, were both sent to jail in 1984.

Gabriel Zaka is a freelance writer.

Kayode Fayemi: Re: Buhari Vs Jonathan, Beyond The Election

Opinion: Could This Be The Turn Of The Progressives?