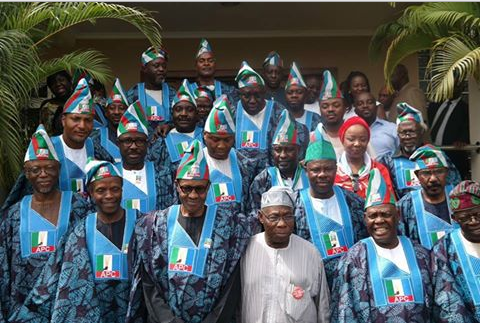 Once again supporters of the APC, whilst chanting ”sai Buhari” and carrying brooms, have stoned our candidate President Goodluck Jonathan whilst he was on his way to a rally in the north. It happened in Bauchi state. This is the second time that this has happened in two days. The first time it happened in Katsina state.

Worse still this time around their violent actions have resulted in the brutalisation, wounding and hospitalisation of no less than six of President Jonathan’s security operatives. Once again, just as it was in Katsina, the whole thing was well-orchestrated and well-funded by the APC and there is an obvious conspiracy to hurt and intimidate the President and his supporters and prevent them from campaigning in the north. This is despite the fact that Jonathan is very popular in many parts of the north and he has millions of followers there.

We wish to assure the APC that this barbaric and uncivilised behaviour will not deter Mr. President from campaigning in every nook and cranny of this country because his supporters, in both the north and the south, expect no less from him. The question that Nigerians must ask is this: will Buhari not call his supporters to order and stop this violence unless and until someone is killed? Is that what he and his APC want? Do they want the President and those that go on campaign with him dead?

Why do they delight in violence and intimidation? Are they scared of a free and fair election? Can they not handle the prospect of defeat? Has it finally dawned on them that they are going to lose the election woefully and consequently they wish to avoid that by creating a crisis in the country? We warned them about the consequences of their reckless and dangerous behaviour, their fondness of attacking the President and his campaign team and their irresponsible and insatiable appetite for aggression and violence when it first happened in Katsina state a few days ago but General Buhari and the APC would not listen and they have refused to call their supporters to order.
Instead they have continued to relish and delight in their habitual violence and the most heinous and hideous forms of unprovoked attacks and they have consistently encouraged such behaviour. It is no wonder that Buhari was once nominated by Boko Haram to be their negotiator and spokesman when the idea of dialogue with the Federal Government was mooted in 2014.

It is interestring to note that when Buhari’s supporters killed a number of youth corpers after he lost the election in 2011 and wrought havoc in various parts of the north, he refused to apologise to the families of those that were so brutally murdered and he showed absolutely no remorse even though the killings were done in his name. This was despite the national and international condemnation and outrage that those killings attracted. I guess that is Buhari for you: adamant, stubborn and lacking in compassion even where human life was lost.

One wonders if the same spirit still resides in him? Is there any indication that he has changed? Is he preparing for a repeat performance of what his supporters did after losing the election in 2011? Does he still hold to his ”baboon and dog will both be soaked in blood” philosophy if he loses the february election? Are his supporters and allies still threatening to ”make the country ungovernable” after he loses the election? We sincerely hope not because this time around he and his supporters may not get away with it so lightly.

We wish to take this opportunity to serve them notice of a final warning: if they do not desist from these unprovoked attacks and if anything untoward should happen to President Goodluck Jonathan whilst he is on campaign or even after the election the consequences will be grave and worse than they can possibly imagine. Buhari was not attacked by supporters of the PDP when he campaigned anywhere in the south so why should President Jonathan be attacked by supporters of the APC when he campaigns in the north? Enough is enough.

The behaviour of the APC in this respect is utterly reprehensible and we condemn it in the strictest terms. Under no circumstances should violence be condoned or encouraged by them or anyone else because this is simply an election and not a war. The truth is that the APC have become utterly desperate because they can see defeat staring them in the face. They have found it difficult to come to terms with the fact their their candidate is a man with questionable health who has been rejected by the Nigerian people and who does not have the strength, energy or vision to govern Nigeria.

They also find it difficult to accept the fact that he is a confirmed perjurer who falsely swore to an affidavit and lied under oath that he had a secondry school certificate and that that certificate was with the army. This mendacity goes to the very heart of the issue of character and integrity and it is indicative of the fact that not only is Buhari wholly unfit to rule Nigeria but also that his party is a haven of morally reprehensible degenerates and questionable individuals.

Lai Mohammed, the spokesman of the APC, has said that we should go to court about the certificate issue if we feel sufficiently aggrieved about it. He has convenientlly ignored the fact that the courts are on strike and that for now we cannot do so. When the courts are open we shall explore that possibility and consider that option but until then we shall continue to raise the issue and put the relevant questions to Buhari and his party.

Our position is that Buhari is not qualified under the law to run for the Presidency because he has not been able to produce or display his secondry school certificate as required by law and this is the basic requirement for anyone that wishes to aspire to that exalted office. We also believe that he was not even qualified to have gone to the officers training college of the Nigerian Armed Forces in 1968 because he never had the prerequisite qualifications to be admitted. At best he ought to have remained a non-commissioned officer and not an officer in the Nigerian army. We believe that based on that he ought to be stripped of all the entitlements and ranks that he attained within the army over the last 46 years.

The truth is that with Buhari the more you look the less you see. His story and whole history is shrouded with fraud, deceit, false claims, double-speak and double-standards and we shall continue to alert Nigerians about the dangers of electing such a dubious man as their President and putting him in power. And we shall do this whether the likes of Lai Mohammed or his campaign spokesman Garba Shehu like it or not. The latest development is that these desperate men have now fraudulently procured a fake and forged result sheet which is meant to fool Nigerians into thinking that Buhari actually passed his exams.

Yet the Nigerian people have not been fooled. They know that if they were to give such fraudulent people power it would result in disaster and the Nigerian people would never do that. Buhari’s quest for power and his mantra of change is a mere illusion and it will never come to pass. He will fail simply because our people wish to move forward and do not wish for a return to the past.

Permit me to end this contribution on a rather personal note. When people like Garba Shehu say they want a clean campaign which is devoid of tough words and hard and bitter truths it makes me laugh. Running for an election, looking for a mandate and seeking for power is not a beauty pageant and neither is it so anywhere in the world. It is tough and sometimes it can get nasty.

They are nothing but a pack of desperate wolves in sheep’s clothing who say one thing on the pages of the newspapers and who do the opposite in the field of political battle. They pretend that they want peace but in actual fact they love violence, they encourage it and they have consistently indulged in it. On our part the PDP Campaign Organisation will continue to keep the peace but we cannot continue to guarantee what the reaction of our supporters will be if these acts of physical provocation and violence continue.

By their consistent and continued acts of violence and vitriolic words of hatred Buhari and his APC have not only violated the historic Kofi Annan-led Abuja Peace Accord but they have effectively raped it. Finally they must come to terms with the fact that when I speak I am doing so for millions of supporters of President Jonathan and the PDP. I do not speak in my own capacity as Femi Fani-Kayode but as spokesman of the PDP Presidential Campaign Organisation.

All the personal attacks against my person in paid adverts and sponsored press releases by Garba and Lai only serves to encourage and embolden me and is indicative of the fact that I am raising issues that they cannot defend and that are making their leaders and their party very uncomfortable. I happen to take pleasure in watching them wriggle and sweat so they should get ready for far more. The game is on.

Opinion: Could This Be The Turn Of The Progressives?