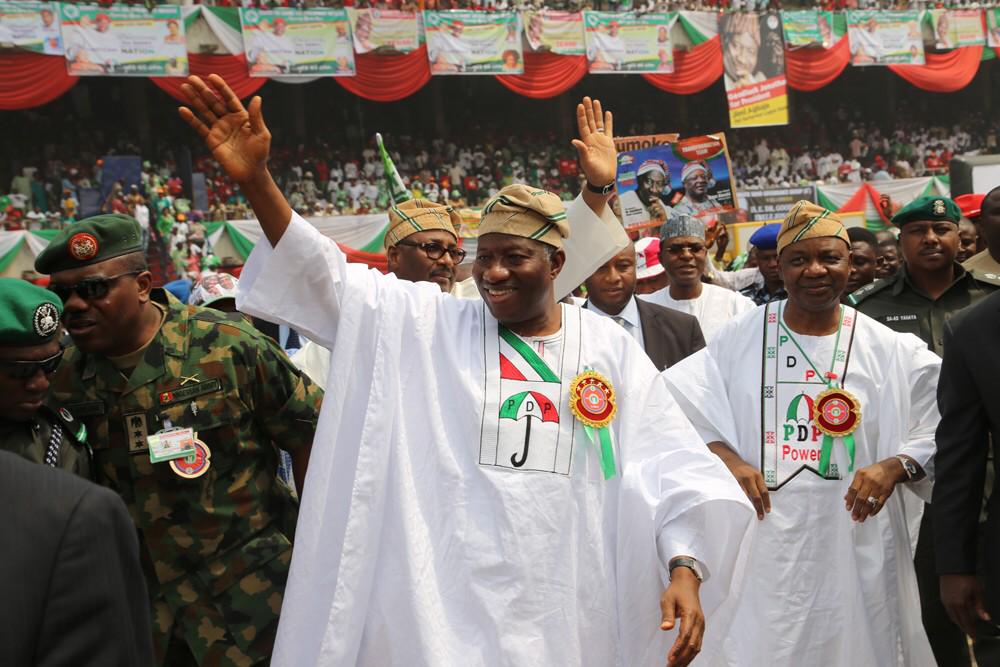 One would have thought President Goodluck “Ebele” Jonathan was a student of “Machiavellianism”, if he were a political scientist. A pip at the book; The Prince, written by Niccolo Machiavelli mirrors Mr President’s deceit, deviousness, ambition, and of course, brazen unscrupulousness inherent with the characters in the book. Now the brutal reality has downed on him: the unpatriotic and uninvested nature of his politics and its fickleness is sinking his political ship.

In the beginning -2011 – President Goodluck Jonathan beguiles Nigerian electorate with the shoeless narratives and wheedled the people’s mandates unto the bargain. The greasy, shifty-eyed President got way with 22 million plus votes, even though the figures was sexed up.

Nevertheless, Nigerians empathised with him. Reason: he was shoeless.

There is no question he had good intention, but this well-meaning and democratically minded patriot unwittingly allowed sycophants to dig political grave for his government. What majority of Nigerians want is a government that would take a firm stand on any issue and lead them out of their hopeless plight. To this end, Mr President has been found wanting.

The President’s shoeless wile is well known. It was his call to electoral arms in 2011. Nearly four years ago, it resonated with a vast majority of ordinary folks. The unwary identified with the tale of a barefooted country boy done good encapsulated in the shoeless yarn. All simple folks saw themselves in the ‘I am Goodluck Jonathan’ tale. Today the narrative is inverted. In a normal society the president surely would have stood out as a grotesque cramp of misfit.

Sadly, that is not the case with us in Nigeria.

Ali M Ali gives an adequate explanation and reason why we are at the edge of the brink: “We are in an era of “less”. Everything is “less”. Modern day fashionistas insist that “less” is more. I am bewildered.

How could ‘less’ be ‘more?’ But in this country’s incredible political clime, this could’t be truer. The ‘less’ is, indeed, truly, more. Consider the on-going charming thriller for instance. It involves two narratives of the ‘less’ genre. The shoe (less) and the shame (less).

It is engaging. It is gripping. It is the kind of thriller that would keep you on the edge of your seat – all the time. Were it being shown in the theater, this thriller would morbidly fascinate the audience and kept it spellbound”.

President Jonathan is back at his swy, dizzy tricks. This time, with not very impressive and persuasive gimmicks. He roars with a long tirade: “Buhari can’t remember his phone number, throwing people into jail is different from frighting corruption, stealing is not corruption, buying new cars, houses and aircrafts by politicians and bureaucrats is not corruption, political opponents are behind by failures, I will implement National Conference Report if re-elected, I
will fight corruption, I will fight Boko Haram, I will stabilise power, I will, I will… I will! Mr President, no doubt, is a gifted manipulator, with a passion for intrigues.

Frankly, he has been less prodigious. His style of governance has brought Nigeria in the same stead with nations that scarcely protect their citizens. Over 2,000 people were butchered in Baga, Borno State at the weekend in the deadliest massacre to date carried out by the Boko Haram militias at a time 3.7 million people gathered to mourn 17
terrorist victims in Paris, the capital city of France.

With sadistic fancy, inherent with most blind sided absolute rulers, President Jonathan can only thrive in evil times like this, blaming others for his failures. With his acclaimed forensic talents and his subtle sense of political strategy, the blandly President could not forestall the slaughtering of Nigerian citizens he swore to protect by the poorly armed ragtag nihilist Boko Haram insurgents.

In the social media, frustrated citizens are of the informed view that any shoeless fella should be given one and asked to “beat it”. The president merely did penance in Lagos by blaming himself and his imaginary enemies for failing the country in the last six years at the saddle. The revealed self-embitterment and the bashing in Gen.
Buhari’s head barely begs the solution to the problems.

The people have already come to the conclusion that President Jonathan “is lacking in broad vision, knowledge, confidence, understanding, concentration, capacity, sense of security, courage, moral and ethical principles, character and passion to move the nation forward on a fast trajectory.” His administration has demonstrated that it is incapable
of stepping up to the Boko Haram’s plague. Neither can he tame overt corruption by sending corrupt government officials to the gallows, and ensure power stability after trillions of Naira has been spent.

How come that under President Jonathan government there has been so much poverty, so much human suffering, in the midst of so much plenty? How come there are no solutions in this dark days of his government, when the factories are silent, when the registered unemployed youths soars to about twenty million on the average? The hard reality of
poverty and plush life style of those in his government opened the eyes of millions of the masses to the unprecedented swindles, lies and betrayals of the people by the PDP-led government.

The shopkeepers, artisans wanted electricity, youths who have come of voting age since the last general elections wanted some prospect of a future that would at least give them a living. To the millions of discontented Nigerians, Buhari’s whirlwind campaign of restoration offer the desired hope.

They are of the conviction that he would make Nigeria great again. He will refuse to kow-tow to the western imperialists who are clamouring for continues devaluation of the Naira which they could to achieve under his military regime. They are convinced that Gen. Buhari would stabilised the economy, stamp out corruption heist and bring he money
barons to heel and see to it that every Nigerian had a job and food on his/her table.

This time, Nigerians have a choice to make between Gen. Muhammadu Buhari and Goodluck Jonathan. The President is not be compared with Buhari who towers above him both in height and intellectually. Mr Buhari is full of faith and certain of the future and the will to free the masses with his unlimited love for all who believe in a “New Nigeria”. This is the first time his determination becomes more vivid to tear off the mask from the faces distorted by greed, faces of
corruption and mediocrity since his democratic engagement.

Truly, the future of Nigeria does not lie with the political parties of destruction, but rather with the parties which carry in themselves the strength of the people, who are prepared and who wish to bind themselves to the aspiration of the people. Gen. Buhari has assured that he will sure-up the cracked foundation of the Army’s strength and prevent its legacy from ruin.

He promised to train and equipped the Army that will put an end to the Boko haram scourge which has been allowed to fester for too long under the PDP government. He achieved that with the taming of the Maitatsine group that was as deadly as the Boko haram insurgents in 1983 when he was military Head of State. This is one reason Nigerians are certain that Gen Buhari would shake off the shackles of humiliation visited on the Nigeria Armed Forces by Boko Haram militias and bring about a big Army for the militarists.

The hard-pressed people are angling for change, as well as demanding a way out of their sorry predicament, which the opposition ably articulated and signposted in their manifesto of change. The APC presidential candidate is a veritable dynamo, a man of starling character, unselfish, modest, honest, and incorruptible individual who would restore stable government and rescue the country from the growing slump and political chaos.

As 2015 runs its uneasy course in this election year, Nigerians are poised to give Mr Jonathan millions of shoes to “beat”. He needs them, even if it is to outdo the former Philippine first lady Imelda Marcos’ legendary shoe collection of more than 3,000 pairs. Mr Jonathan surely would need them in the swapping turf in the land of his forebears after February 14th. There is no need to steer savage battles in the gutters.

Opinion: When People Are Not Entitled To Their Own Opinions