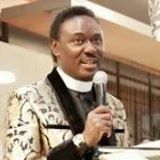 The founder and presiding pastor of Household of God Church International Ministries, Pastor Chris Okotie has said that President Goodluck Jonathan’s declaration for the 2015 presidential election on November 11, 2014 has occult significance.

Okotie, who wrote on his Facebook page on Friday, emphasised that the exact date the President made his declaration had a ritualistic undertone.

Season’s greetings to my teeming readers. Let me still serve you a morsel of politics even as we celebrate the joyous Yuletide season. The mood isn’t cheery because of the horror of senseless bloodletting by the Boko Haram insurgents, but life must go on, in the hope that things will get better in the New Year; even if they seem otherwise at the moment.Our politicians are self-serving and uncaring, but we are a resilient people who always ride out of every storm.

The noisy campaigns of the Presidential nominations of the two major parties- the ruling PDP and the APC, appear to have eclipsed the nation’s top headliners of 2014, such as the Chibok girls abduction, and the random seizure of territories by the rampaging Boko Haram terrorists. Also submerged in the nomination hoopla are the impeachment of Governor Murtala Nyako and the defection of the five PDP governors that triggered it; Ayo Fayose’s upstaging of APC’s Kayode Fayemi in the Ekiti Governorship elections, the dramatic fall of crude oil price and its implications for our oil-dependent economy, and the recruitment exercise that left scores of young graduate job-seekers dead from stampedes.

All of these and other major headline news of 2014 may soon be a distant memory, but we can’t easily forget the failure of the national soccer team and defending champions, the Super Eagles, to qualify for the African Cup of Nations, the Air Force plane that was shot down by the Boko Haram insurgents and one of the pilots reportedly beheaded. Indeed, with its gruesome operations getting to new levels of cruelty, Boko Haram stretched our military to the limit, and exposed the decay and dismal state of our armed services. That was what came to light in 2014, but must never be allowed to continue in 2015.

The Ebola Virus Disease, EVD, came and was defeated, but not until after claiming the lives of some victims including Dr. Stella Ameyo Adadevoh and other patriots; rather than plan how to prevent future resurgence, the APC and the ruling PDP were bickering over whom to credit with the arrest of the disease. Of course, 2014 produced its fair share of scandals and corruption in high places too numerous to mention.

Sad to recall, Pastor Ayo Oritsejafor’s private jet which was involved in the cash for arms scandal, was a major headline news about which I wrote a commentary, which provoked CAN’s response in pedestrian vulgarity, which I declined to nobilitate with a retort. The pain for Nigerians is the impunity with which perpetrators loot the treasury under the watch of President Goodluck Jonathan.
President Jonathan and his strategists should be having a big laugh after a ‘hard-won’ battle that finally handed His Excellency an unprecedented sole candidacy of the ruling People’s Democratic Party, PDP, in the 2015 presidential elections, with a loud declaration at a rally on November 11, 2014. Gen. Mohammadu Buhari (Rtd) is flying the flag of the APC, having clinched the party’s ticket in closely fought primaries.

The implication of Dr. Jonathan’s declaration on that day (11-11-2014)has occultic significance. When the number is repeated, it takes a greater ritualistic intensity. In this case, we have 11-11-11, because when you add the date 11-11-2014 as a year together, you arrive at 11 also. This is in consonance with occultic numerology.

The question is; was this declaration orchestrated by occultic considerations, or is it a mere coincidence? Since 11 represents; judgment, destruction and death of man, can we extrapolate from the experiences of President Goodluck Jonathan’s administration so far that number 11 has been prevalent in our nation? Has there been spiritual judgment, has there been destruction and death on a large scale? You, be the judge.

If the Church of Jesus Christ appreciates this understanding, they’ll be more reluctant to gravitate in the direction of President Jonathan, even though the leaderships of CAN and PFN have made a subtle endorsement of his candidacy. President Jonathan does not belong to the Davidic genealogy; he belongs to the house of Saul and invokes the spirit of Jeroboam. He swears by the Lord and Malcham. He that hath an ear let him hear.

Fixing all the fault lines of 2014 must begin with the management of the usual post-election crisis which is the hallmark of every transition in Nigeria. Whatever the outcome of the Presidential elections, the polity would likely quake as the vanquished beat the drums of war against the backdrop of grandstanding by the victors. If we have embraced a paradigm shift as I have suggested, Nigeria would have gone a different way.

Despite all of that, and the likely unpleasant fall-out of the forthcoming general elections, Nigeria will survive as usual. Expect threats of war, but surely, the Nigerian political class is too timid to roll out the tanks for battle, because, nobody would like to put his life on the line over a lost election.

Unfortunately, our gullible youths do not know this. They are usually the canon fodders who bear the brunt of the violence. The political elites use them to unleash on any post-election conflict, while the politicians and their cronies escape to safe havens where they enjoy their loot. Be that as it may, the voters have the final choice to make in these crucial elections.

Tolu Ogunlesi: My Most Influential Nigerians In 2014

@DeleMomodu: The Gods Are Not To Blame