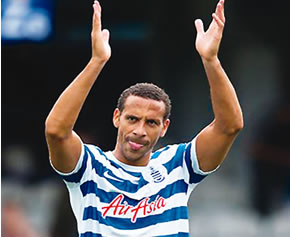 Van Gaal has started to live up to his star-billing in recent weeks, overseeing a run of six wins from seven matches which has lifted the Red Devils into third place ahead of the Boxing Day visit of Newcastle. And Ferdinand, whose 12-year stint at Old Trafford ended in the summer, is convinced his old side’s revival will continue.

“Six weeks ago I think you’d be thinking hopefully they’d get in the Champions League,’’ he said on Sky Sports News. “Looking at them now, I think they’ll finish definitely in third place, definite Champions League, then maybe they’ll get one of the cups.

“Third place at the moment. If they continue on the run they’re on, then who knows? They could go into second or first, but I think Champions League this season would have been something they were asking for and I think they’ll finish in that comfortably.’’

He added: “(Van Gaal) had a sticky start, but the lads seem to be getting a better understanding of what he wants and you can see that in the results in the last six or seven games. Michael Carrick coming back has been a huge plus for them.’’

Ferdinand also spoke of the change in his relationship with former United boss Sir Alex Ferguson since the Scot’s retirement in summer 2013 after 26 years at the helm.

“It’s crazy,’’ the 36-year-old said. “You listen to him speak now – he created that divide between himself and the players and didn’t really get himself involved with the players, but now I’ve spoken to him more than when I played at United. He seems like he’s really enjoying life and I’m sure he’s enjoying Christmas with the family.’’