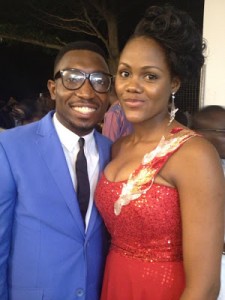 The Couple blessed with 3 adorable children in an Interview with PUNCH talked about what marriage means to them….

The musician’s wife, Mrs Dakolo narrated how he finally proposed to her….

‘It happened early in the morning. He said he wanted to make me breakfast in bed then he came with the plate covered and stayed a few minutes. I wasn’t expecting anything more than noodles but he opened the plate and brought out a ring,’ she said.

On what marriage means to him, the winner of West Africa Idols, Timi explains: ‘It’s simply two different persons coming together to spend the rest of their lives forever. It sounds big and risky but it comes with favour, grace, maturity and a certain level of respect depending on how you manage it. After I am paid for a show, I share the money into several places, and just a fraction gets to me because a lot of people are involved in the matter.’…

Timi  who went on to tell their love story explained his first encounter with Busola.. Excerpts of what he said: ‘We met at the House on the Rock church. I was not searching then but simply minding my own business when I spotted her. I was standing behind the choristers on the podium when I sighted this fine girl. I went to speak to her by asking her why she was frowning in church. I remember saying: ‘Hi, my name is Timi Dakolo,’ and she said ‘And so?’ You would not believe that she gave me a fake number and I started searching for her every Sunday until I finally caught up with her and challenged her for giving me a wrong number. It was my lucky day because that was how we started talking. This was in 2010.’

Too Late To Apologize? Actor, Joseph Benjamin Begs For Forgiveness