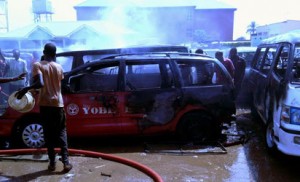 A Bomb Explosion has occurred at a market in #Nigeria’s Bauchi city caused “heavy casualties”, said the Red Cross.

The bomb ripped through the Central Market in Bauchi on Monday and the number of casualities cannot be ascertained yet, but eyewitnesses said that many people were killed with many others injured.

Large sections of the central market area were on fire, sending plumes of smoke into the air, he said. Medics were driving some wounded away in ambulances.

The explosion hit hours after a double bomb attack in the main city of neighbouring Gombe state killed at least 20 people and wounded 40.

No group immediately claimed responsibility for the attack in the city of Gombe. Boko Haram insurgents have repeatedly set off bombs targeting civilians, especially in the northeast where they are trying to carve out an Islamic state.

“The second blast was worse than the first one because many people rushed to the scene and were affected. Many were killed and many injured,” witness Mohammed Fawu told Reuters by phone.

Setting off twin bombs is a classic guerrilla tactic which seeks to maximize casualties.

Hours later, an explosion shook a busy market in the north Nigerian city of Bauchi on Monday, engulfing it in flames and causing an unknown numbers of casualties, a Reuters witness said. Large sections of the central market area were on fire, sending plumes of smoke into the air.

Medics were driving some wounded away in ambulances. Bauchi state and Gombe state are next door to each other.

The official from the National Emergency Management Agency (NEMA), who declined to be named, said 20 were confirmed dead so far and that 40 wounded were currently being treated.

The blast had been caused by bombs but it was not yet known whether a suicide bomber was involved.

“I watched as the corpses were being evacuated by the police. They all died in the buses,” said Hadiza Suleiman, an undergraduate student, adding that she had seen 20 bodies.

Meanwhile, earlier today there was a bomb explosion in Gombe that killed more than 20 at a busy moto park area.

Following the explosion in Dukku moto park area of Gombe today Monday 22nd December 2014 , the National Emergency Management Agency (NEMA) led rescue operations have evacuated all persons affected by the incident to the hospital while the area has been cordon off.

Most of those evacuated were taken to the Gombe State Specialist Hospital where they are now receiving treatment from injuries sustained in the explosion. The explosion occurred at about 10:56am and resulted in 18 deaths and about 21 injured.

Meanwhile, the National Emergency Management Agency advises the public to be vigilant and report all suspected movements to security operatives.

In his last video, the leader of the Boko Haram sect who threatened to kill the Emir with activities of his group known for similar bomb attacks vowed to  abduct more women and kill those who are not true muslims in the Northern region of Nigeria.

Ahead Of 2015 Elections, @Chude Jideonwo @DebolaLagos Other Founding Members Resign From @EiENigeria Board