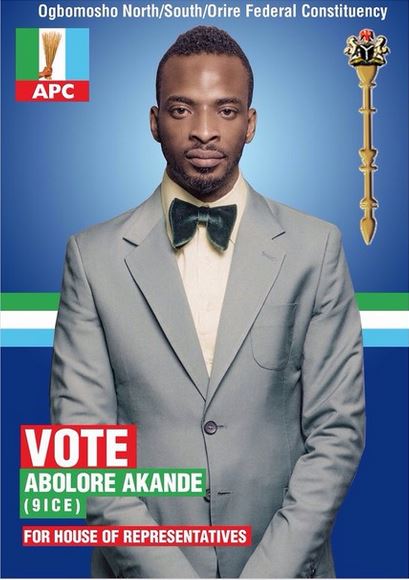 Days after he lost out at Sunday’s APC Primary election for Ogbomosho North/Ogbomosho South/Orire Federal Constituency, 9ice has petitioned the All Progressives Congress in Oyo state.

The Nigerian singer whose real name is Abolore Akande released a Statement on Tuesday expressing his dissatisfaction at the way the election exercise was carried out.

He lost the Primaries to Prince Akeem Oyewunmi.

See his press statement below…

I Abolore Adegbola Akande an aspirant under All Progressive Congress party contest against the inconclusive primary election that was carried out at Soun Stadium in Ogbomosho North L.G.A. Area of Oyo State.

There were no ballot boxes, the electoral officers came to the venue 5:45pm same time an aspirant (Oye Oyewunmi) arrived at the venue, there were no delegate passes, there was no accreditation.

I am using this medium to appeal to the appeal committee to render this election null and void with immediate effect, also another date and different venue outside the town should be schedule for a proper and free and fair election at a later date.