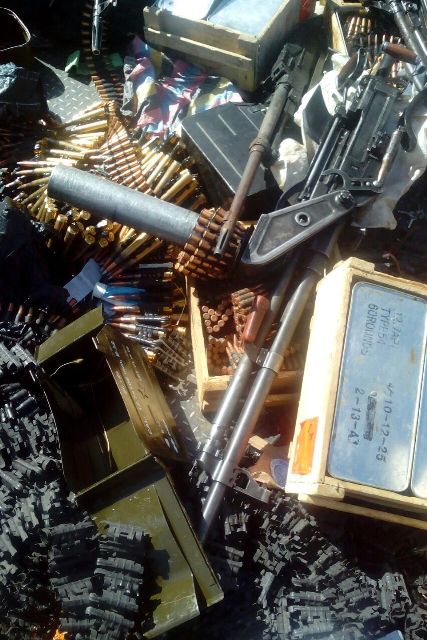 The United States government has come out to deny the accusation, insisting they have learnt their lessons the hard way in the past in the sell of arms to other nations to combat terrorism.

Nigerian government were disenchanted over US government’s refusal not to sell arms and has taken their purchase of lethal arms towards the East.

The United States and Russia over the years have been stuck in a clash of very different beliefs and ideology- the growth in weapons of mass destruction formed the basis for an International power struggle with both sides vying for dominance exploiting every opportunity for expansion anywhere in the world.

On April 8th, 2010, United States government and its Russian counter part signed the new Strategic Arms Reduction Treaty (START) in Prague, a pact to cut nuclear arsenals and it was a significant result of a change in the right direction. The pact didn’t last and for the past two decades, disputes between United States and Russia were handled on a practical level, they had to do with clashes of interest, dealings with Russia’s neighbours, the use of force, conflicts over trade and sometimes for pride.

United States and Russia have always been in a tradition of misreading each other’s actions and with mutual trust all gone between the two powerful and opposing nuclear giants of the world, with no hope of both countries resolving their diplomatic brawl anytime soon. Any ally of any of the opposing bipolar nations that goes to do a deal as powerful as arms procurement with their perceived enemy may as well be assumed to be an enemy.

Nigeria’s meddling in far East to purchase lethal arms for it’s armed forces may worsen the strained diplomatic relations between Nigeria and US government.

Before now, we have long been close allies with the US, our colonial heritage, nature of our politics and economy shaped our foreign policy to be that of Pro West. The United States is no doubt Nigerias greatest trading partner and undeniably it’s most important diplomatic partner over the years.

Many may argue as a sovereign nation we owe no nation any explanation on where to go and purchase lethal weapons for our armed forces but the question is, have we thought of the “diplomatic implications” of such act?

Nigerians that are in tune with foreign affairs analysis are divided over our government’s decision to go to far East to procure arms for our armed forces, some are asking how is Russia and its allies perceived in International affairs? Have we had a good diplomatic rapport with Russia and its allies in the past?

If Nigeria succeeds in procuring arms from Russia, between East or West bloc, which one are we going to belong to?

A nation with a “dependent economy” should be careful with it’s foreign policies, it is not a hidden fact that we depend on the West for almost everything we need in Nigeria, from financial aides to food, businesses, energy, health, education, entertainment, auto mobiles etc.

A dependent and depleted economy like ours cannot in all ramifications be able to justify its act of going to purchase lethal arms in the hands of perceived enemies of the West. Have we thought of what will happen to us as a nation if other Western allies decides to support US government and cut off its diplomatic ties with Nigeria in this imbroglio we are instigating against the US?

The United States government has been vocal in their positive but dissenting disposition in defending their actions.

According to US envoy to Nigeria, Ambassador James Entwistle in a recent chat explained: “Over the past decade, the U.S has learned that defeating terrorism requires more than just military power. It requires protecting civilian populations despite the fact that terrorists don’t. It requires working to develop impoverished areas where extremism takes root. It requires ensuring that education is accessible to all. It requires empowering a free and fair press to report openly and without fear of reprisal. And, perhaps, most importantly, it requires engaging the growing youth populations that are being swayed towards extremism due to lack of economic opportunities, education, and distrust of government. In other words, it requires a comprehensive, whole of government approach.”

The United States government, over the years has been supportive in different capacities in the war against terror in Nigeria until recently when Nigerian government cancelled further trainings. Though Nigerian government has played down talks of strained diplomatic ties, saying the recent call off of further trainings of our armed forces was logistical and not political and it does not affect both country’s existing military coorporation.

From US body language so far, its posturing and scepticism over the issue of arms deal with Nigeria to end insurgency ravaging the North Eastern part of the country is as a result of the political under tone in the Boko Haram insurgency, they are yet to be convinced if the procurement of these lethal weapons will be strictly to fight the war against terrorism or for other reasons especially now that election is gradually coming close.

Until Nigerian government adopts practical measures cited above by US ambassador to Nigeria and intensify its efforts in the fight against insurgency, US government and other Western allies may never take our fight against terrorism serious.

Nigerian government should be careful in its decision to avoid small arms proliferation in Nigeria, going to far East or black market as suggested may do us no good.

The proliferation of light weapons and illicit arms trafficking in some parts of Africa have been a major threat to peace, security and development in the continent and Nigeria is not left out in this quagmire.

The United States government may be saving us from a whole lot of troubles which our desperate politicians maybe planning to infiltrate on the already charged atmosphere by not acquiescing to the sell of arms to us at this crucial hour.

“What an old man sees sitting down, a young man cannot see standing up”.

Joe Onwukeme: An Idealist, is a Social & Political Affairs Analyst. Writes From Enugu.

Femi Aribisala: Time To Get Rid Of Tinubu’s Cronies In Lagos

Yakubu Dati: Nigerian Airports Not The Worst In Africa