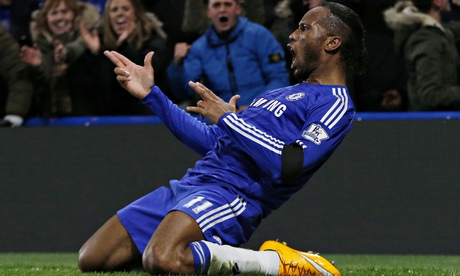 Chelsea defeated Tottenham Hotspur 3-0 in a London derby on Wednesday night and Blues legend, Didier Drogba was a central figure in his club’s triumph. The 36-year-old Ivorian provided an assist for Eden Hazard and then scored the second goal which effectively sealed the victory before Loic Remy who came on as a substitute midway in the second half netted the third.

Speaking after the match, Jose Mourinho praised the efforts of his Ivorian striker:

“First of all he’s a team player, after that he’s one of these players with an old days mentality. He’s not selfish , not vain, a humble guy. He plays for the team, fights for the team. He’s fantastic.

“When he comes from the bench for the last couple of minutes because the team needs him, he does it with the same mentality as when he starts against Tottenham Hotspur.”

“We need Diego Costa but our mentality is the right mentality”.”You don’t cry about it. You give responsibility to the others and they respond in the best way.”

Chelsea remains at the top of the premier league table and have not lost a game in all competitions this season.

Chelsea Is Not Invincible – Arsene Wenger