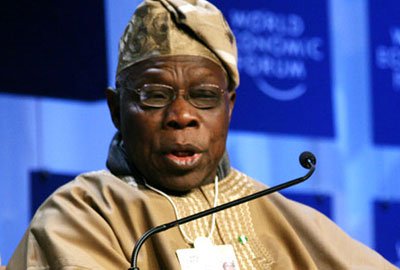 Former President Olusegun Obasanjo is haunting his hand-picked former protégé, President Goodluck Jonathan, like a malevolent ghost. You may wonder why OBJ, after four years as a military ruler and another eight years as an elected president, is still butting like a stubborn, demon-possessed ram at the doors of Aso Villa, Abuja? What does he still want? What did he forget in the seat of power after occupying it for 12 years? Why can’t he just go home and enjoy his new-found affluence after his latest eight years as president during which he doubled as Minister of Petroleum Resource for six years?

If you put this question before Obasanjo he will tell you it is because he “loves” Nigeria; he is a great “nationalist”, and he cannot keep quiet when things are going wrong. He will conveniently hide the fact that he is the cause of many of our problems.

He will not accept responsibility. Instead, he will divert attention and point accusing fingers at others, making accusations that he is also guilty of a million times over. In the process, Obasanjo succeeds in hoodwinking a few gullible, uninformed Nigerians and raises applause among those whose political interests resonate with his objective of bringing down a sitting president.

But those of us who know him probably more than he knows himself are not carried away. We know his motives and methods all too well. Obasanjo’s estranged daughter, Senator Iyabo Obasanjo, in a letter in January this year in which she disowned her father, told us Obasanjo believes in his heart he “owns” Nigeria. President Jonathan, in his own angry rejoinder to a windy, scathing attack by Obasanjo, likened the Ota poultry farmer to a goat seller who, after selling his goat and pocketing the money, still holds on to the goat’s tether rope. In other words, Obasanjo, after handpicking and installing people in power, seeks to control them. When they refuse to be at his beck and call, he starts to fight dirty in the public square because he has come to see the Nigerian seat of power as his personal booty.

After all, he fought the civil war and collected the instrument of surrender from Biafra. We have since heard the truth about how Obasanjo fought that war. One of the civil war commanders, Brigadier Godwin Alabi-Isama, in his book: The Tragedy of Victory, actually described OBJ as a coward. In various interviews after the book was published, he disclosed that Obasanjo has bullet wounds on his buttocks. This means he was shot while running away from enemy onslaught! But he makes loud noises about his civil war “heroism” and feels entitled to exclusive freebooting on our national estate.
Obasanjo is confronting GEJ because the president is a gentleman. He could not try it with the late President Umaru Yar’ Adua, who was much tougher and savvier in the game of power than Jonathan.

As sick as Yar’Adua was, he was able to curtail Obasanjo’s goat-seller mentality and keep him tightly leashed. Those were the days when people like Nasir el Rufai actually bolted to America and only returned to become a troublemaker because Jonathan is a gentleman.

This same Obasanjo troubled General Babangida when the latter was in power because Babangida respected him. But when he tried it with General Abacha, we know what happened. Obasanjo came out of jail in 1998 looking like an exhumed corpse.

Besides, Obasanjo is a master in the game of hypocrisy. He likes to call other people thieves, and he is the first to accuse another person of being corrupt. The idea is to divert attention from his own unquantifiable deeds that fabulously enriched him, both as a military leader and elected president.

Sound Sultan, one of Nigeria’s most creative avant-garde musicians, has a song he entitled: “One day bushmeat go catch de hunter“. In it he sang: “Ole de shout ole”.When you catch a pickpocket red-handed, to avoid being lynched he begins to shout: “ole!, ole!!” (Thief!Thief!!).Was it not under Obasanjo that bags of money meant to induce lawmakers to impeach a political enemy of the president were displayed in the House of Representatives? Yet he calls MPs “looters”.
When Abacha raised the pump prices of petroleum in 1994 he established the Petroleum Trust Fund, PTF and used the proceeds to intervene in infrastructural reconstruction. Where did Obasanjo put proceeds of eight price hikes that took fuel price from N22 to N65 per litre over eight years? At least, Jonathan ploughs back his own increase from N65 to N97 into a fuel subsidy regime that guarantees steady fuel supply and funds for the implementation of Subsidy Re-investment Programmes, SURE-P, nationwide.

Fuel subsidy was bedevilled by corruption, but it is working. We are enjoying it. But we can’t see anything Obasanjo did with his own extra N43 per litre. Billions were sunk into the refineries but they never worked.

Billions were wasted on Independent Power Plants, but turbines were imported and left for years at the ports because they could not be moved inland. Government companies were sold for pennies to fronts and cronies. But in four years, Jonathan has laid down a clear agenda to overcome the challenges of the power sector. It is very slow-going, but is moving forward, with zero reports of corruption in the sector which is now mainly in private hands.

Yes indeed, Jonathan has his problems as a leader. He is too laid back about fighting corruption. It doesn’t seem to bother him. President Jonathan is too much in the background as my leader. I like my leaders there up front, inspiring me with words, deeds and examples. I like them tough and decisive, but always putting the interest of the nation first. I don’t like walking up front and looking back for my leader.

Thirdly, I don’t like the way Jonathan has handled Boko Haram. If he had done the needful things two years ago, we would not have the second largest number of displaced persons in the world, with parts of our territory under devilish Salafist Islamists.

I also have reasons to believe that if the Jonathan regime was given the support it needed, it would have recorded more successes than any other in our history. The quest by regional hawks to snatch power by all means, tied to the Boko Haram terror war and jackal-like opposition, have taken a toll on all of us. No regime has been sabotaged by the same people it strives to save from their enemies the way some Northern leaders have undermined the Jonathan regime. People who destroyed Nigeria in their 40 years of total brigandage are ganging up as the “opposition” to return us to where they left us in 1999, and Obasanjo has become their fire-eating generalissimo.

If Jonathan is a problem, Obasanjo created it by selecting him to pair with a terminally ill Yar’Adua, so that he (OBJ) would call the shots from Ota. Yar’ Adua and Jonathan were his “Plan B” after he failed to grab third term. I agree with former Speaker, House of Representatives, Umar Ghali Na’Abba, that if Obasanjo looks into the mirror he will see the trouble with Nigeria.

The goat seller wants his goat back after pocketing his profit. Well, Nigeria is not Obasanjo’s goat. The earlier he gets the message the better for him – and us all.

Tope Adesipo: Before Boko Haram Consumes Us All