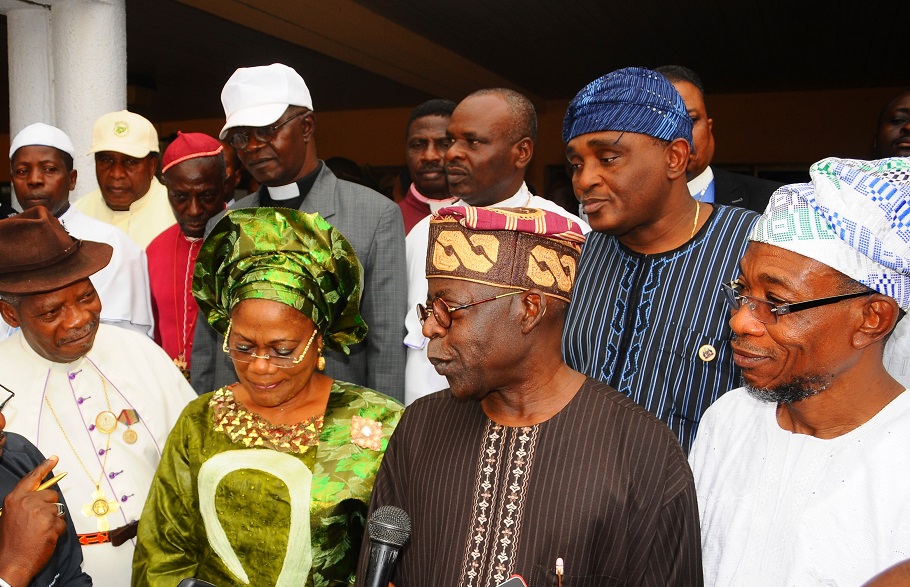 Senator Bola Tinubu, a National Leader of Nigeria’s Opposition All Progressives Congress, APC has asked Nigerians to prepare their charms and other native powers for the 2015 poll.

Tinubu made the statements during the inauguration of Governor Rauf Aregbesola for a second term in office in Osogbo, Osun State, on Thursday.

Tinubu said to the crowd that thronged the event, “we are today celebrating your firm stand, courage, determination and steadfastness. The greatest philosophy that started in Osun is common sense revolution. It is the ability to send these people away. They take from you and steal from all of us. Is Nigeria better off in the past four years? It is getting worse.”

Aregbesola had won the August 9 election by polling 394, 684 votes to defeat the standard-bearer of the Peoples Democratic Party (PDP), Senator Iyiola Omisore, who secured 292,747 votes.

After taking the oath of office, administered on him by the state Chief Judge, Justice Oyebola Adepele Ojo, around 1.15 p.m., Aregbesola, accompanied by his wife, Sherifat, rode in a motorcade around the stadium.

Delivering a speech, titled: “Continuing on our path of greatness,” the governor said “we are here today to celebrate the goodness of God, indomitable spirit of our people and democratic ideals,” recalling that “before, during and on the day of the governorship poll, there was a security siege on Osun to instill fear in our people.”

While contending that the best thing for Nigerians is to vote massively for the APC in 2015 general election, Aregbesola asserted that “in the past four years, we have kept faith with the mandate given to us by the people. We have rekindled the virtues of hardwork.”

According to him, “the PDP stands for poverty, mystery and insecurity. They are prepared to sacrifice the entire nation for their hold on power.

Other party chieftains, alongside Tinubu at the ceremony, were former military head of state and APC presidential aspirant, General Muhammadu Buhari; erstwhile acting national chairman of the party, Chief Bisi Akande and APC state governors, among others.

Others were Speaker of the Lagos State House of Assembly, Honourable Adeyemi Kuforiji; the Alaafin of Oyo, Oba Lamidi Adeyemi; Oba of Lagos, Oba Rilwan Akinolu; deputy governor of Oyo State, Chief Moses Adeyemo; wife of the former Vice President, Alhaja Titi Abubakar and a host of others.

A Vote For PDP Is Vote For Insurgency, Corruption, Unemployment — Atiku