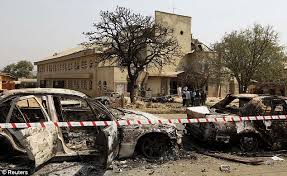 The Sultan of Sokoto, Alhaji Sa’ad Abubakar III, and the National President of the Christian Association of Nigeria, Pastor Ayo Oritsejafor, on Monday openly disagreed on the continued violence being unleashed on parts of the country by Boko Haram.

While Abubakar said Islamic leaders had “tried so much” to preach against the activities of the sect, Oritsejafor said they had not done enough in reaching out to the insurgents and making them understand the true teachings of Islam.

PUNCH reports that the two religious leaders spoke at a round-table meeting with special advisers on religious affairs from the 36 states of the federation and the Federal Capital Territory in the Presidential Villa, Abuja.

The programme, which was declared open by Vice-President Namadi Sambo, was organised by the Offices of the Senior Special Assistants to the President on Islamic and Christian matters.

It had “Toward synergising and interfacing in the religious sector for national development” as its theme.

Abubakar, who is also the leader of the Jama’atu Nasril Islam, had in his remarks said there was no problem between Islam and Christianity. He argued that if there was any problem between Christians and Muslims, such matter should be dealt with at that level.

He heaped the blame on what he described as lack of education about religions which breeds lack of trust and sincerity. The Sultan regretted that while Islamic leaders had continued to condemn the insurgents, they were still being accused of not doing enough.

This, he said, was not fair to the religious leaders. He said he had personally gone across the globe to preach peace and uphold the fact that there was no problem between adherents of Islam and Christianity.

In his quest for peaceful relationship between the followers of the two religions, the Sultan said he had written two separate lengthy letters to the Pope and the Islamic State of Iraq and Syria.

He said when people were asking Islamic leaders to sit with insurgents and discuss, they fail to note that the current situation could not be compared to the activities of militants in the Niger Delta.

Abubakar said, “In a situation where Muslim leaders condemn insurgents and they will still be told they have not done enough. That is not fair.

“We don’t tell ourselves the truth. Followers are not telling the leaders the truth, and the leaders will think they are doing the right things.

“If the governor in Sokoto is told that he should sponsor four people to Christian pilgrimage, so be it. It is government’s fund. If a land is needed in Kano for a church, they should get it after following the due process.

“Muslim leaders have tried so much. I have gone across the globe to say that there is no problem between Islam and Christianity.

“We wrote to the Pope, the document is titled the Common World – published in 2010. He replied us and since that time, we have been having meetings.

“We also wrote to the ISIS to tell them that they should not continue to do what they are doing in the name of Islam. If we read those documents we must trust what we have said.

“If we don’t trust one another, we cannot move forward. If we say one thing here and go back to our states to do other things, we have wasted our time and resources.”

While urging followers to stop telling their leaders what they want to hear, the Sultan said he and Oritsejafor had, two years ago, written a letter to President Goodluck Jonathan on how to end the Boko Haram violence.

He said he again called the President’s attention to the letter when they were invited recently to an expanded meeting of the Security Council.

The monarch explained that he had told the President that they had done their best because they could only advise the government.

He said, “Followers should stop telling the leaders what they want to hear. We wrote a letter to the President on what to do to end the scourge about two years ago.”

Abubakar also noted that religious leaders under the auspices of the Nigeria Inter Religious Council had been meeting and going round the country to interact.

He said members of the council had not been able to meet in the last one and a half years because of insecurity.

The Sultan alleged that while they decided to move an earlier meeting fixed for Gombe State to Abuja, the Secretary to the Government of the Federation failed to release funds to them.

He said like every other Nigerians, Islamic leaders also feel the pain of insurgency because one life lost, especially to insurgency, meant a lot to them.

Mohammed reiterated his position that the insurgents were not committing the atrocities in the name of Islam.

The Sultan advised that as the 2015 general elections approach, politicians should carry out their campaigns without reference to candidates’ religious or ethnic background or colour.

Oritsejafor, in his reaction, commended Abubakar for writing the ISIS, saying he had not heard about the letter before.

He however called on the Sultan to also write another letter to the Boko Haram, which according to him, had killed more people than the ISIS.

The CAN President said since Boko Haram members have clerics they listen to, Islamic leaders must find a way of reaching out to them and present the teachings of true Islam to them.

Oritsejafor said the insurgents would not listen to him but would rather kill him fast if he dared to reach out to them.

He said, “His Eminence said he wrote a letter to the ISIS. I have to truly congratulate you for that because that was a very good move. I didn’t know about it until now and I am so glad it happened.

“I have made an appeal several times that there are some of our leaders who must come together: religious, political and traditional. They must come and discuss.

“I have been told that Boko Haram members , to a very large extent, are very vast in scriptures. What scriptures do they use?

“There are still religious clerics that they respect. If these people are not presenting the right thing and are misrepresenting Islam, which I agree it is so to a very large extent, we agree that our brothers should reach out to them so that the real Islam can be presented to them.

“They won’t listen to me, in fact, they will kill me faster than anything else if I go to them, oh yes, that is the truth. I am aware of that. In fact, as I speak, I know what is going on around me all the time, so I know.”

According to him, Muslims who are killed are those who disagree with the sect’s ideology or those who refuse to work with them by giving information.

He described as painful and disheartening, a situation where all churches in Mubi in Adamawa State and other places had been levelled.

He also decried a situation where a state governor would vow that he would not use government money to sponsor adherents of a particular religion on pilgrimage.

The CAN leader said it was not enough for religious leaders to say sweet things, they must match their words with actions.

He continued, “The problem with gatherings like this is that if we are not careful, it becomes an occasion for good photographs, shaking of hands and talking very nicely.

“If you come out to say certain things, there are those who feel you are rocking the boat but God is in the boat, the boat will not sink.

“It is true that Islam and Christianity have no problem. I am glad you (Sultan) said there could be problem between Christians and Muslims.

“Why should a church in the North for the past 30 years not get a Certificate of Occupancy? Any mosque or church in any part of the country should be able to get C of O.

“Why is it that people will want to build a place of worship in a particular part of the country and they will not get land?

“We must create a level playing field for everybody; we must deal with everybody equally.’’

A Closer Look At Officer Wilson’s Testimony, A Man In The Eye Of The Storm