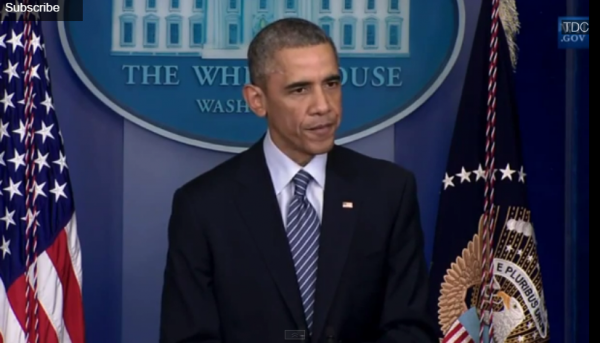 Yesterday the Ferguson Grand Jury decided not to charge Darren Wilson; the 28-year-old white Police officer who was charged with the shooting of 18-year-old black, Mike Brown on the 9th of August 2014 in Ferguson, Missouri, a suburb of St. Louis. Already, the court ruling has led to protests already and US President, Barack Obama has addressed the nation in this regard. Meanwhile, the family of the late Mike Brown  has condemned the ruling but has urged Americans not to match violence with violence.

He urged Americans to accept the decision even though it was always going to lead to disagreements either ways:

“Either way it was going to be the subject of intense disagreement”.

“We need to accept that this decision was the grand jury’s to make.”

“We have made enormous progress in race relations over the course of the past several decades. I have witnessed that in my own life, and to deny that progress, I think is to deny America’s capacity for change. But what is also true is that there are still problems — and communities of color aren’t just making these problems up. Separating that from this particular decision, there are issues in which the law too often feels as if it is being applied in a discriminatory fashion.”

‘There Is No Jewish Symbol On The New 100 Naira Note’, Presidency Hits Back At MURIC Over ‘Misleading’ Claims