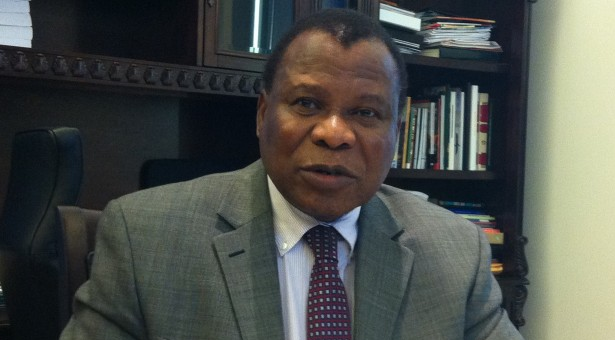 At a time that the dare devil terrorists detonated their diabolical article of trade-BOMBS and unleashed deadly violence on over forty youngsters in an all boys high school in Yobe State, the least most Nigerians expect from their political leadership is not a sign of weakness but a resolution to be much more combative and effective in crushing decisively these terrorists.

Nigeria’s ambassador to the United States of America, Prof. Ade Adefuye who represents the nation in a country reputed as the most important in terms of international visibility and significance just did the opposite by painting a graphic picture of an administration that is frustrated to such a level that it has no other way out but to moan and cry like a child.

As a citizen I am aware also that President Jonathan has indeed made the right response by affirming his administration’s resolve to end these vicious circles of violent terrorism threatening to tear apart the beloved Nigerian Nation. At his declaration of intent to run for a second term under his political party- Peoples Democratic Party [PDP] the President fundamentally painted a picture of an administration that will continue to work and remained undeterred by the blood cuddling antics of these murderous terrorists. The administration also has laid out in broad terms other practical measures to bring about a permanent resolution of this debacle.

Even with these reassurances from President Jonathan, the statement made by the Nigerian Envoy to the United States in which he criticised his host country for failing to sell military hardware to Nigeria is indeed an unnecessary agony which should not be entertained at these trying periods of our nation’s history particularly given the fact that millions of Nigerians are looking up to the political leadership to show the light for others to follow towards providing effective panacea to these mindless attacks on Nigerians by these terrorists.

The news report further indicated that he said the war against the insurgency would have been won long ago, had the US agreed to sell weapons to Nigerian government. The litany of interrogatories that immediately follow from this agony of a Nigerian diplomatic official are to find out if the United States is the only producer of weapons and military hardware and secondly has this official forgotten that even from the name of one of the most fearsome weapons AK47 there are other good alternatives for arms supplies such as Russia from where this calibre of weapon originated.
But this gentleman Mr Adefuye continued with his song of lamentations when he delivered an address at a meeting with U.S. Council on Foreign Relations approximately twenty four hours before the public declaration for second term interest by President Jonathan, and said America’s response to Nigeria’s request has been so far surprising, as it is disappointing given the cordial diplomatic relations that the two countries have enjoyed.

His words: “The Nigerian leadership: Military and Political, and even the general populace, are not satisfied with the scope, nature and content of the United States’ support for us in our struggle against terrorists. We find it difficult to understand how and why in spite of the U.S. presence in Nigeria with their sophisticated military technology, Boko Haram should be expanding and becoming more deadly,” Adefuye told the gathering in Washington.

He explained that at first, Nigeria had problems with the manner in which intelligence was being shared and that the U.S. Government claimed that the problem has been addressed, but it is still there.

He said: “The U.S. Government has up till today refused to grant Nigeria’s request to purchase lethal equipment that would have brought down the terrorists within a short time on the basis of the allegations that Nigeria’s defence forces have been violating human rights of Boko Haram suspects when captured or arrested.

He further affirmed that; “This is based largely on reports submitted by human rights groups and sections of the Nigerian media that have sympathy for the opposition parties and are prepared to use whatever means possible to embarrass the government of President Goodluck Jonathan.

“The Americans claim that lethal law forbids the sale of lethal equipment to governments that violate human rights.”

This ‘crying’ diplomat Mr Adefuye said: “We implore the Council on Foreign Affairs to put pressure on the State Department and the Department of Defence to re-examine the basis of their refusal to sell the equipment to Nigeria. Our people are not very happy with the content of America’s support in the struggle against Boko Harm. The terrorists threaten our corporate existence and territorial integrity. There is no use giving us the type of support that enables us to deliver light jabs to the terrorists when what we need to give them is the killer punch. A friend in need is a friend indeed. The true test of friendship is in the times of adversity.”

According to him, the United States has nothing to lose if Nigeria is a secure nation, adding that Nigeria has played prominent role in ensuring sustenance of democracy in Africa and ensuring stability which America will benefit immensely from.

Come to think of it why is this diplomat openly castigating the United States when it is clear even to the most illiterate kindergarten that there is no binding military cum defence pact between Nigeria and the United States unlike the same kind of partnership that exists between all of our sub regional neighbours and some World powers like France and the United States? Does Ambassador Adefuye need further elementary lessons in international diplomacy to know that you don’t task the third party to assist you do your fight when you have nothing in common in terms of strict applicable and binding military pact? Must we celebrate our ignorance always in public? What is the most primary duty of government? Please lets stop this abysmal and disgraceful celebration of ignorance in international arena and take concrete measure to procure arms from alternative sources other than the United States to engage these terrorists and defeat them once and for all.

Femi Aribisala: The Lord God Almighty, The Love of My Life

‘Being Unemployed’ In Nigeria, [MUST READ] Prose By Okwuanya Pius-Vincent