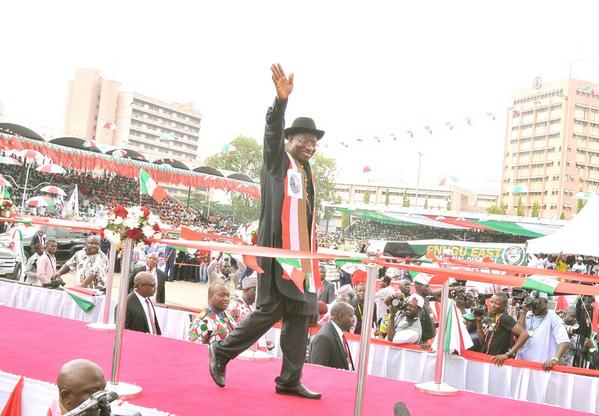 The Peoples Democratic Party has noted that Tuesday’s landmark declaration by President Goodluck Jonathan, the overwhelming support shown by Nigerians and catalogue of unprecedented verifiable achievements marshaled out have thrown the APC into confusion.

PDP National Publicity Secretary, Olisa Metuh in a statement on Thursday said the APC in their “characteristic manner, instead of accepting the successes already acknowledged by Nigerians, went into their usual shadowboxing and mischievous propaganda in a failed attempt to score a cheap political point.”

The ruling party said such a lurid epithet on the APC defies the logic of an alternative while exposing it as hypocritical and opportunistic. It therefore called for objectivity and forthrightness from the political class, especially the opposition as the campaigns for the 2015 general elections begin in earnest.

It further berated the APC for always seeking to gain political capital from the insecurity challenges in the nation adding that “Nigerians, by their massive support on Tuesday showed that they know the truth and are solidly behind their President.”

The statement said notwithstanding that he defied the expectations of the terrorists and their sponsors to go ahead with the declaration, a day after the Potiskum bombing, the President and the PDP stand unyieldingly by the mourning families as his disposition, speech and mobilizing of over 100,000 Nigerians in prayers at the event clearly showed.

It added that for the APC to cry wolf over this declaration which was scheduled almost a month before the bombing, means the opposition party is either lacking in institutional memory or suffering from a deliberate amnesia.

“Nigerians may recall that on the 20th of May, 2014, there was a twin bomb blasts in the city of Jos, killing 118 people and wounding at least 56 others. However, this tragedy on the nation did not restrain the APC from holding its so called “Mega Rally” in Ekiti the very next day, May 21 in promotion of the gubernatorial campaigns of the then Governor Kayode Fayemi. The entire top hierarchy of the APC, its national leaders, governors and the Interim National Executive were in attendance. At the rally, the APC scarcely observed a minute silence in honour of fellow Nigerians mowed down in cold blood before charging the atmosphere with usual insults and loathing acts of insensitivity, speaker, after speaker.

“It will be recalled also that while Nigerians and the International Community applauded President Jonathan for proscribing the terrorist sect, Boko Haram, the APC released a statement on the 10th of June 2013 alleging that such an act was “unconstitutional”! This is the APC pretending away from the heinous crimes of the same terrorist organization it once sought protection for.

“On the other hand, it is on record that President Jonathan and the PDP cancelled all scheduled activities on June 3, 2012 when the Dana Air crashed and declared a week national mourning. Unfortunately, the APC desecrated this as all its leaders converged on Kano the same week to celebrate a turbanning event, meaning that 163 souls that perished as a result of that crash were not important to the party.

“All over the world, it is known that terrorists plan their evil activities to manipulate political events and policies and that the more you allow them space, the more dastardly and frequent they turn. If terrorists must be denied the publicity they crave so much for, it becomes the responsibility of all patriots in moments like this to work hard to prevent them from hijacking events or taking control of our destiny. Clearly, the APC lacks the political capacity to understand this matter of statecraft.

“No doubt, it is easy to deduce that the APC was stunned by the mammoth crowd that turned out for the event and indeed unsettled by the unity existing in the PDP even in the wake of congresses for the election of candidates participating in 2015 general elections. Too bad! Nothing can APC do about this! In spite, we wish to restate our position on issue based campaigns while challenging the APC once more to match our pace with positive ideas.”

The PDP restated that President Goodluck Jonathan remains the candidate to beat as he enjoys a very strong bond with the people of Nigeria in all the nooks and crannies. This it said is as a result of his exceptional performance in last three and half years not withstanding the spirited efforts by the opposition to distract, detract and frustrate his administration.

“Indeed, no amount of propaganda and negative campaign can take away the visible massive infrastructural developments, the freedom Nigerians now enjoy, the repositioning of the manufacturing sector, the thriving of the private sector in all areas of the economy, the unprecedented but silent revolution in power, agriculture, education, communication, transport and health sectors, all for which our dear nation now ranks as the largest and fastest growing economy in Africa”.